These kind of games are not my wheelhouse. That isn’t to say that I don’t enjoy a challenging game, and I have played a few in my time. But I did not grow up playing video games. I never played in arcades, not even once. My first console was the GameCube, and I only started playing games seriously about 6 years ago on the PS3. I still remember the pride I felt when I finished Wolfenstein: The New Order, the first game I ever finished on hard difficulty. A game like this holds no nostalgia for me and I have quit many like it in the past for lack of patience. I honestly didn’t think I would finish this one either, though not for lack of trying.

My husband suggested I play Cursed Castilla and I, being far too trusting in his judgment, completely failed to do any research prior to starting. This game is resolutely unforgiving. I have heard this claim leveled at many a title, but in my experience, while admittedly limited, this one takes the cake. I spent over an hour attempting a single level. This is a level, not an entire chapter. And while a good portion of that time is testing methods to see what succeeds or fails, after that, it is tirelessly trying to implement the correct technique with precise accuracy. In keeping with the arcade theme of the game, I have calculated that, if every credit in-game is $0.25, then I would have spent $102.25, give or take a couple bucks. This was not a casual undertaking on my part, and I feared for the safety of my Vita at many points of the journey, owing to my propensity of violence towards nearby electronics when reaching peak levels of frustration. But my Vita survived, as did I, and I now present to you the chronicles of my tumultuous journey.

You are Don Ramiro, a knight of the realm, tasked by the king, along with three others by the names of Quesada, Don Diego and Mendoza, to free Castilla from the recent curse under which it has fallen. A multitude of demons and creatures have invaded your homeland, allowed in through a gate opened by the tears of the grieving girl Moura. So you set out on a journey to find the source of the curse, defeat it once and for all, and save your homeland, your precious Castilla. While the story didn’t come into play much throughout the game outside of a basic explanation for your actions, the premise itself was instrumental in setting the ominous and pained tone that I found so appealing. Where many ‘old-school’ games that I’ve seen trend in a more brightly painted and light direction, Cursed Castilla launches face-first into the murky depths of old European lore.

The gameplay basics are fairly straightforward, with a single weapon equipped at any given time, aimed right, left, up or down with the left analog stick. Your two actions on the face buttons are jump and shoot. At first I was thoroughly annoyed at the screen size, but was finally able to notice a setting for this in the pause screen and, though feeling quite sheepish after making this discovery, was quite happy with the improvement this provided. There are 4 screen size options, including one that stretches the image to fit the full screen, giving plenty of options according to one’s preferences. There are also 2 control-scheme options for the face buttons, though as there are only two actions within the game, these are simply reversed versions of each other. 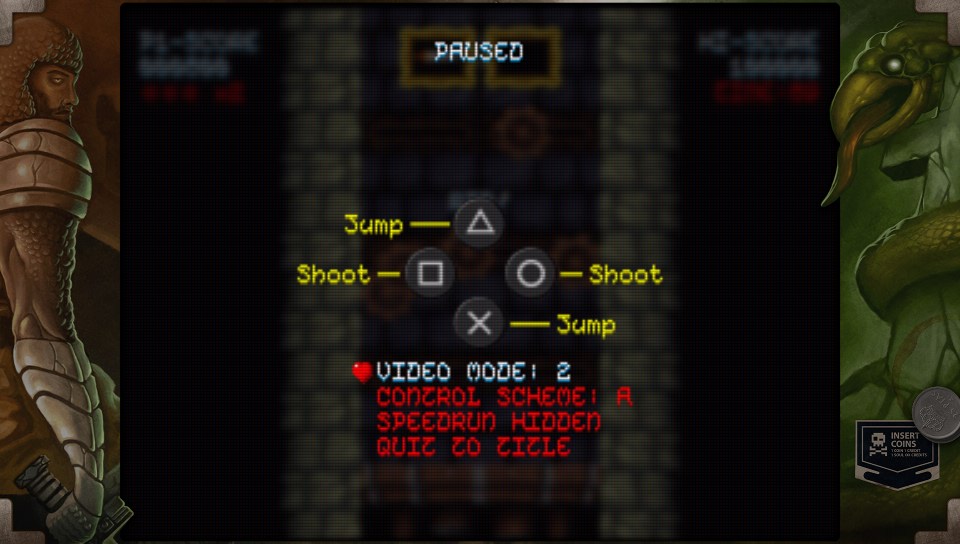 Thank goodness for the simple control scheme, because the true challenge lies with the traversal through each level. Precise platforming is key, and it certainly pushed me to my limits (one might even say past) when working through the puzzles of accurate timing.

You always start with a sword as your weapon, but can find chests containing other weapon options which you can choose to equip according to the situation. This added another layer of strategy that I appreciated whenever I was able to stay alive long enough to keep any weapon other than the base sword. You also have a secondary slot, which you can fill with items found in chests such as the Blue Fairy, who will follow behind you and provide protection with her blue fairy fire power, or a shield, which will take the full damage of any hit but will be lost immediately after that, among other supplementary items. Being a rogue-like, after using your three lives, all items are lost and your score reset. 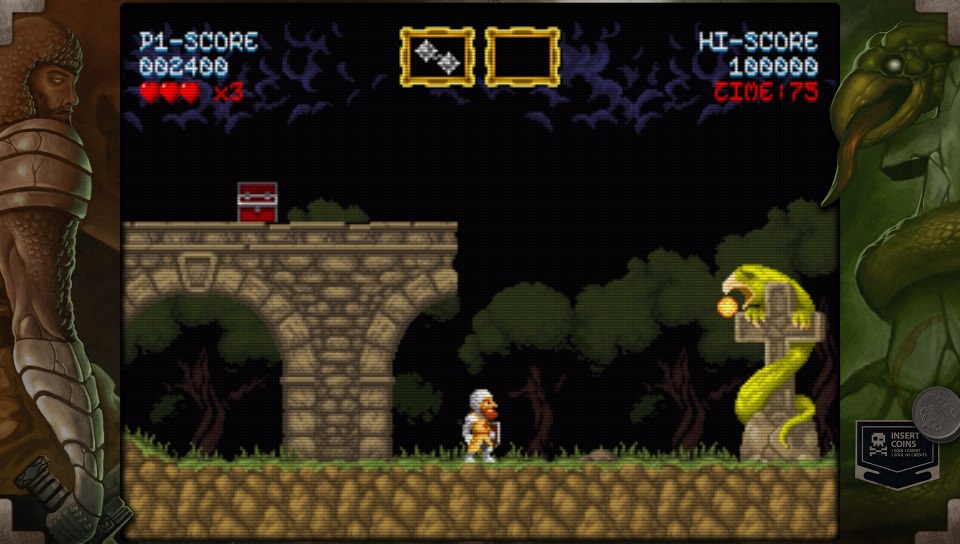 I did not fully finish the game, though I did get the 'bad ending' that wraps everything up at the end of chapter 7. In order to completely finish the game, you must gather a special item hidden in each of the original chapters. As I went into this blind, I did not realize my blunder until the very end. Considering it took me 15 hours to reach even that point, I was unable to take the time to run though the game a second time, which is what would have been required. If one wishes to reach chapter 8, I might suggest taking a quick look at a guide listing these locations. Unless of course you are much more skilled than I, in which case you can probably run through the game multiple times in a reasonable amount of time. 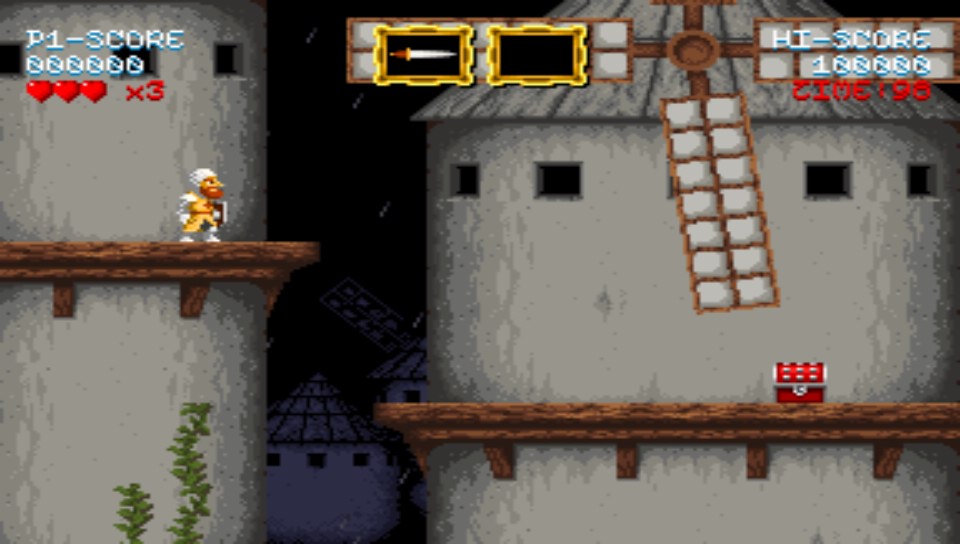 The look of Cursed Castilla is oddly comforting in its historical and mythological darkness, immediately establishing an ominous impression of the locale, while also complimenting the equally sinister gameplay. Set in what appears to be medieval Spain, the environment is softly muted with much of the color reserved for the plethora of enemies you encounter. These are often based on old European mythology, promptly drawing comparison in my mind with the more well-known stories of King Arthur and his Knights of the Round Table, eliciting a sense of effortless bravado as you defeat each enemy and push forward through the shadows, for the sake of your kingdom.

The sound and music weave into your heroic tale throughout, cleverly performing roles of both form and function. The vibrant colors of enemies are most often accompanied by distinct sound cues, helping you identify danger even on your first run through any given level. Secrets are found throughout, with the whisper of metal on metal, generally due to my spasmodically flailing swords, announcing their location. I was quite surprised when, even on perhaps my 10th attempt at a level (or sadly even more), I still wasn’t tired of the music. One would expect nearly any melody to become irritating after listening to the same 15 seconds of the same measure so many times in a row. But it strikes a nice balance between simplicity and complexity that succeeded in helping put me in the perfect, meditative mindset as I laboriously and meticulously worked through each challenge. 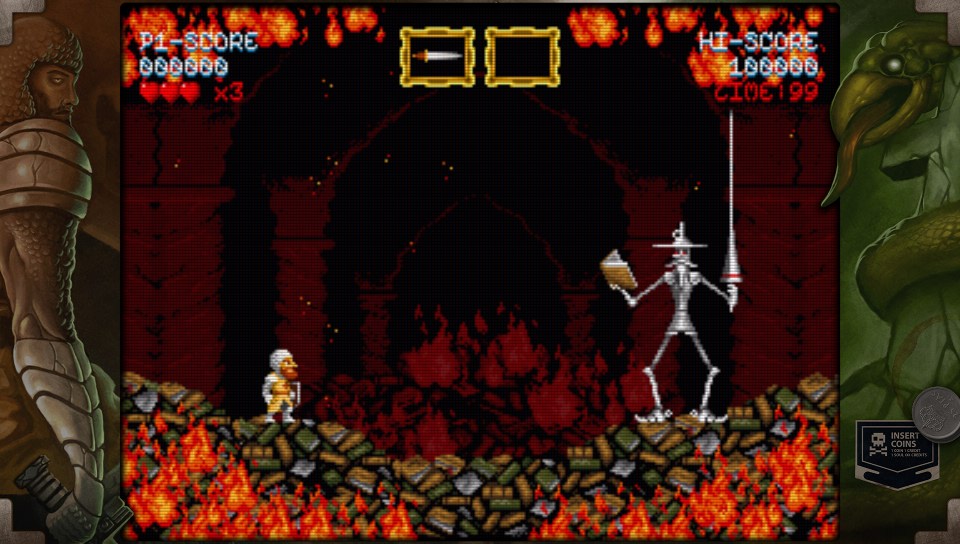 This is not to say that there was never a moment that I wanted to walk away. It took me 15 hours to finish the game, and nearly 3 weeks to put in that time. If I happened upon a level with mechanics that were particularly tricky for me to execute, I would often need to set the game down after only an hour or so of play time, as the frustration would begin breaking down my concentration and my fingers would seemingly gain a mind of their own, deciding that they no longer needed to be subjected to such torture and would simply stop responding. There were times within a boss battle where I felt that a particular run was unwinnable due to random positioning by the enemy. This may be more related to my general subpar abilities, but it still added to the frustration by making 5% of my efforts feel hopeless.

I can think of many times in the past when the difficulty in a game, and the completion of it, simply resulted in a rush of relief, often with a generous side helping of resentment. I would walk away disgusted with how that game had wasted my time, and never pick it up again. But with Cursed Castilla, this was not so. The satisfaction felt after completing a particularly cumbersome level, or finally defeating a boss after an hour of effort, is the prize one seeks. Nearly every situation riddled with struggle eventually led to this experience, and I was surprised each time with how proud I felt. The amount of required concentration, of patience,  of perfection in execution, these all come together in a symphony of success that is difficult to describe and certainly an achievement for which I applaud the developer, as the slightest variation in any necessary element could have easily destroyed the entire experience. 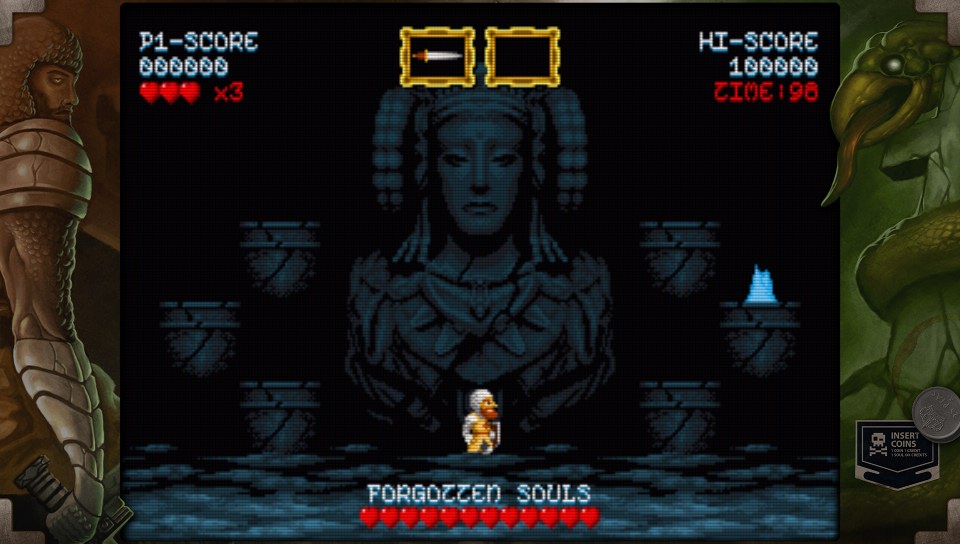 Far too often, games are sold on the premise of nostalgia, and this has had a cooling affect on me, one who is separated from memories held so dear by those around me. Perhaps I was even jealous of those feelings that I could never truly experience or understand. And so I would walk away, label a game as 'not for me', and move on to something else, anything to comfort me in my strange solitude. Though after completing this game to the best of my ability, I find myself suddenly interested in a multitude of games that I have previously brushed off. Perhaps the strength of this game lies not in nostalgia, or perhaps nostalgia lies not in the presentation of a game, nor even in the particular difficulty, but rather in that ethereal feeling of discovery, of trials, of failures, so many failures, and ultimately, in your overcoming it all on your own merits. And that is something we can all cherish. 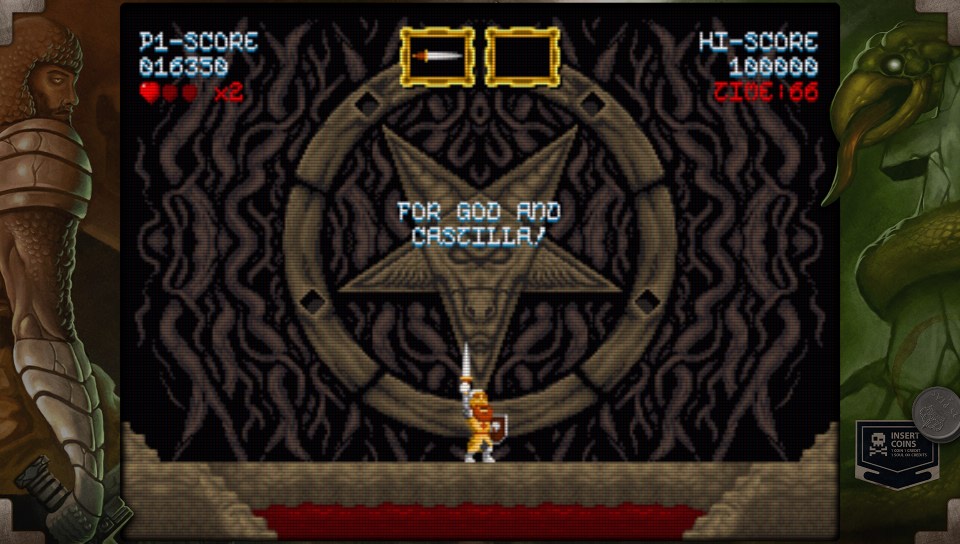 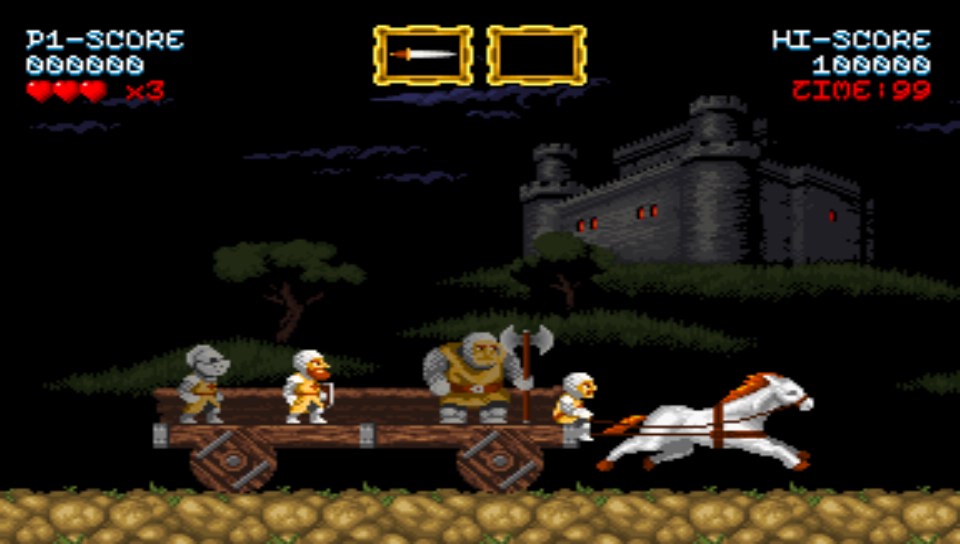 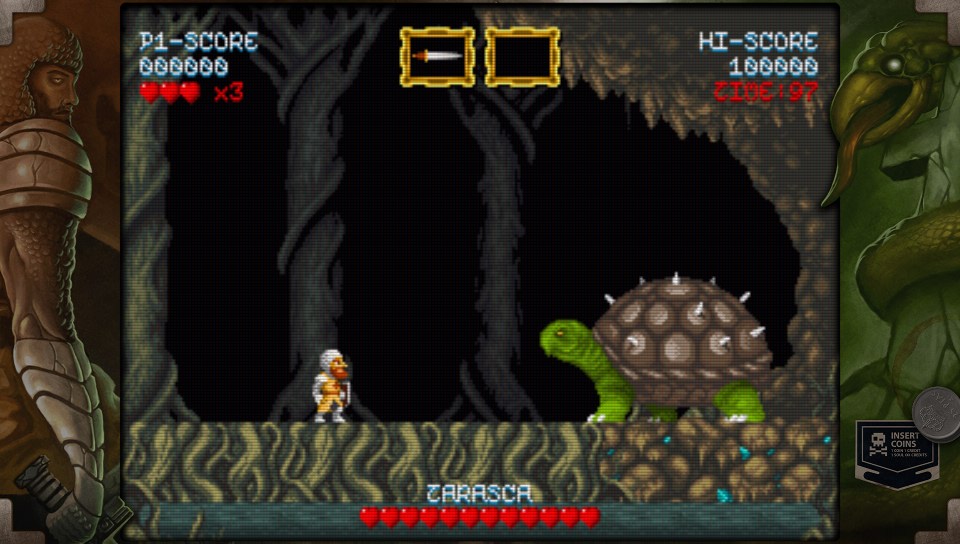