I’ve had my eye on Collar X Malice for quite some time now. While browsing through some foreign storefronts about a year ago, a gorgeous cover drew me in immediately with its amazing character design and daring air of distinctive confidence. I quickly read through the game description, only to come to the disheartening realization that it was a visual novel — and only available in Japanese.

‘This will never be localized,’ I lamented, for it was clearly far darker and stylized than any other otome I’d seen come to the Western market, previous entries of which tended to lean toward the more flowery variety. But low and behold, mere months later we received word that Collar X Malice, developed by Otomate, would in fact be coming west, brought to us by Aksys Games. Without ever looking up a full synopsis of the story, and going solely off of my initial impression of the artwork, my mind was set on experiencing this game. And now, my friends, that time has finally arrived!

Shinjuku has been quarantined after a series of terrorist attacks counting down to ‘X-Day’. For the last 8 months, those deemed ‘sinners’ have been publicly executed, month by month, in the name of a rebirth of Japan. The terrorist group Adonis has effectively taken the city hostage and holds the entire population within their grip of fear, all under the promise of true justice for the weak and down-trodden.

You are Ichika Hoshino, a rookie cop working in the SRCPO, a division recently formed in response to X-Day, and the lowest level of the Shinjuku Police Department. As a member of the SCRPO, your job is to listen to and respond accordingly to any and all concerns voiced by citizens of this beleaguered district of Tokyo.

In a genre drowning in bland, submissive protagonists, Ichika certainly stands out as a no-nonsense heroine. Where I’ve often seen main characters provided as blank slates upon which the player can paste themselves, Ichika has a clearly-defined personality with obvious strengths and flaws, and a strong personal motivation behind all her actions. While I can see this possibly causing a problem for those that don’t connect with her, I find it helps in building a sturdy base from which the story can grow.

In other otome I’ve played, the companion personalities have generally been vastly different from each other, outside of their inexplicable and immediate obsession with the player character. I’d assume this is done with the intent of covering the largest player-base as possible, but it generally comes at the cost of many relationships feeling contrived or forced, often damaging the impact of any existing narrative. Thankfully, this is not the case in Collar X Malice.

There are five potential partners, each with their own distinct personality traits, all rooted in fully fleshed out back stories. There are also clear similarities between them, which certainly makes sense. While each person may have their own personal motivation behind their desire to investigate X-Day, everyone shares the same goal: to stop Adonis from achieving X-Day. This arrangement of diverse hopes and dreams converging on a single intended outcome results in making each relationship feel surprisingly natural and well-rounded. There are even times when Ichika herself expresses distaste toward a particular person, whether they are initially off-putting or they appear to be philosophically incompatible. I found myself eagerly seeking out different paths with each companion, enjoying the added depth provided by optional, or even bad, endings. This isn’t to say that all transitions from colleague to lover are seamless, and there are certainly some jarring moments from time to time. But the effort is clearly there to create plausibility behind each bond, and the strong narrative tends to do a fair amount of heavy lifting when it comes to emotional attachment and believability.

In addition to the main love interests, there is an abundance of supporting characters that contribute in world building. There is Ichika’s younger brother, Kazuki, a high school senior currently in the throes of his rebellious teens. You have multiple coworkers at the police station, including your supervisor, Masanobu Mochida, a passionate officer who never misses a chance to brag about his wife and her various domestic accomplishments. There’s also your former police academy classmate, Yuzuru Saeki, with whom you go drinking on occasion to relieve the stress inherent to your job, despite the fact that he can’t seem to hold his liquor very well. A healthy dose of well-placed humor does wonders in weaving the experience together and nurturing your budding friendships in an otherwise oppressive situation. Add to these various citizens around Shinjuku and many others involved in your investigation, and you find yourself with an extensive cast helping to create a well-realized, lived-in world.

The story progresses at a comfortable pace, with numerous twists and turns. There were multiple times I thought I’d figured it all out, only to gain another piece of the puzzle that threw my entire theory into disarray. For the most part the story and the mystery within maintain logical consistency throughout, though I did notice a few questionable situations or a line of dialogue here or there that didn’t quite fit with the conclusion they led to. But as this was not the norm, it never impacted the overall narrative flow in a distracting way.

While the localization is generally satisfactory, it certainly isn’t the best I’ve seen. There were a couple times where a line of dialogue was located where the character name should be, multiple situations where the text would be awkwardly split across pages and a generally lack of distinction between spoken dialogue versus internal dialogue. A surprisingly common, and particularly annoying, issue is the mismatching of character names. This would occur when identifying dialogue boxes, as well as sometimes directly in the dialogue itself. While it wasn’t game-breaking, it did frustrate me and I could see it becoming confusing for someone who may not be used to reading and identifying Japanese names in large quantities. If you’ve ever played a visual novel before, the mechanics will feel very familiar. You have the ability to skip any text, select chapters after completion of any romance path, and 99 save slots that will certainly come in handy when attempting to reach all possible endings. There is a high volume of decisions to be made, and I would highly suggest using a guide if you intend on going for the true ending.

There is a fun shooting mini-game that I very much enjoyed called Trigger Mode, which activates at various points throughout the game and whose results will actually impact the story. There also seems to be a setting to turn off ‘Love Catch’ in the game, but as I played the entire thing with this setting turned on, I can’t fully confirm how changing this setting may impact the game.

One exciting mechanical addition, when directly compared to previous Otomate games, is the ability to re-map the majority of commands to different buttons according to your personal preference. No more of those devastating moments of reverting to muscle memory from a different game to end up Quick Loading 2 hours back and losing all progress. Don’t even try and tell me that hasn’t happened to you before… Overall, I’d highly recommend this game to any fan of otome, especially to those who may have been underwhelmed in the past with similar entries in the genre. Collar X Malice has a strong-headed protagonist with a bevy of fully formed and fascinating supporting characters. These traits both add to the strength of the story being told and lend weight to each moment of emotional progression. If you’ve been looking for an otome that doesn’t depend solely on its ‘sex appeal’ and takes the concept of narrative and character progression seriously enough to hold its own against other visual novels, this may be what you’ve been waiting for. 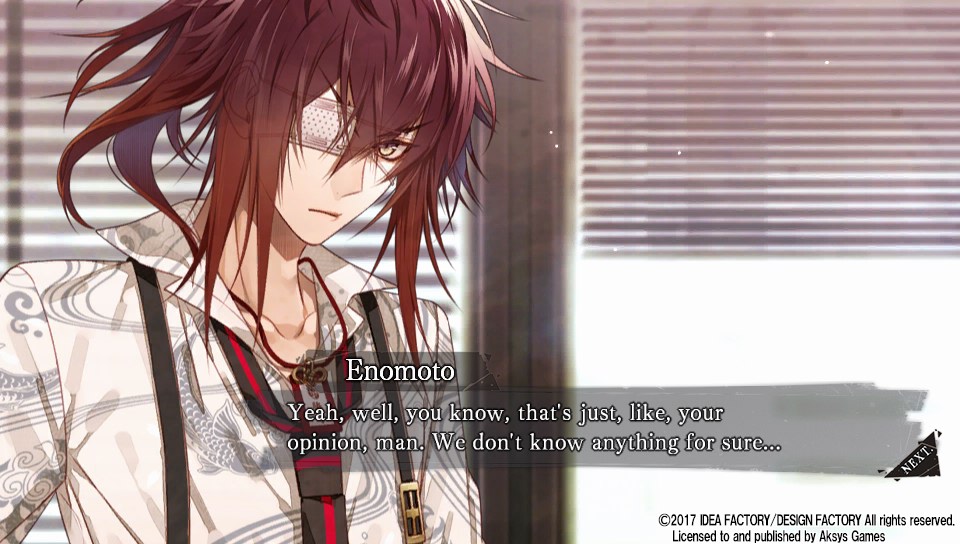 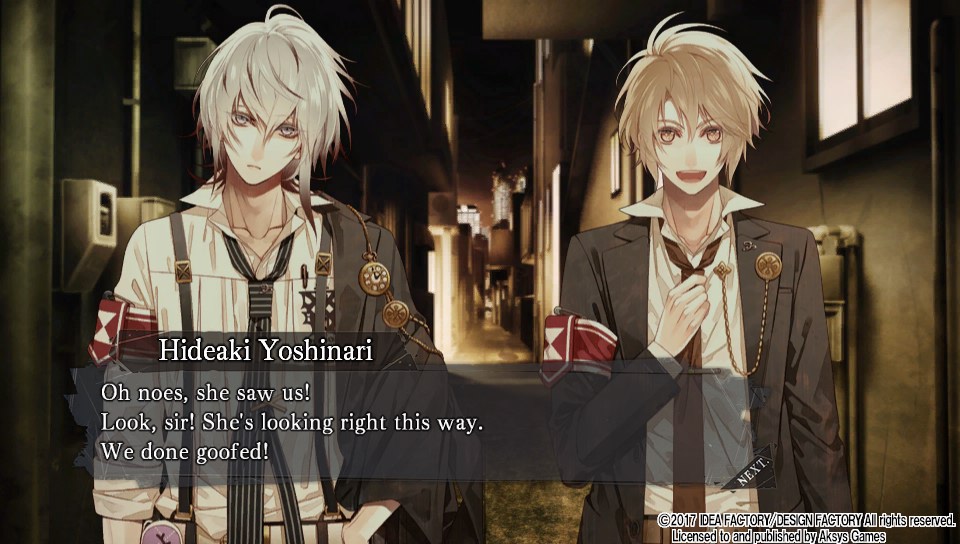 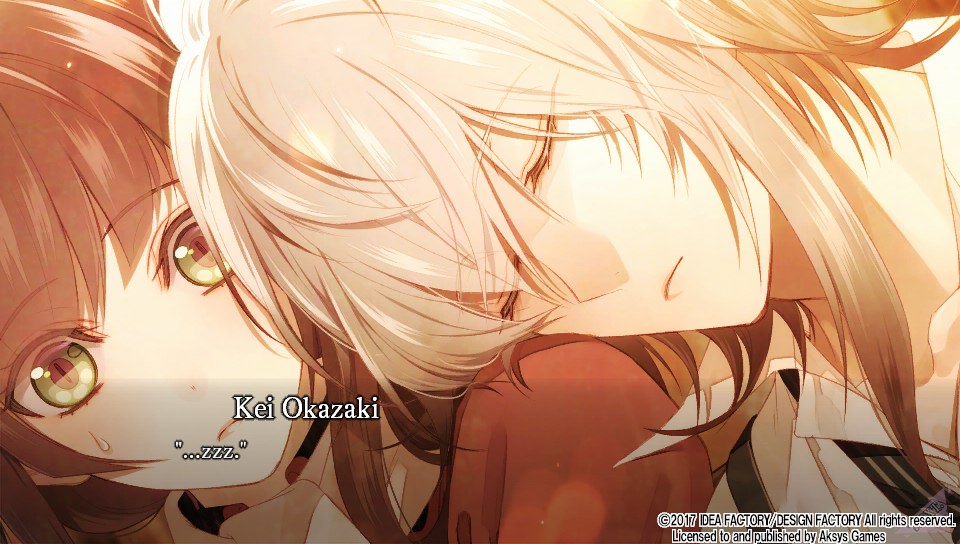 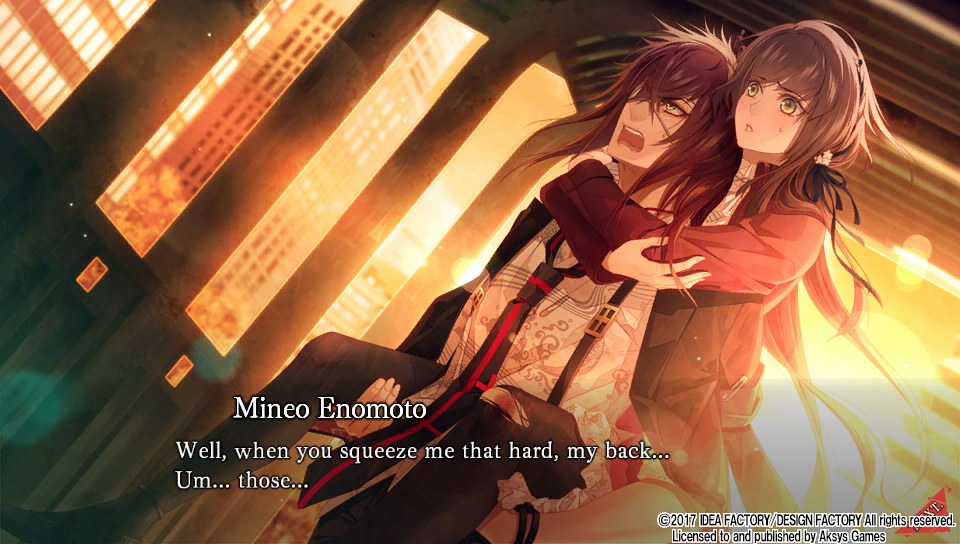 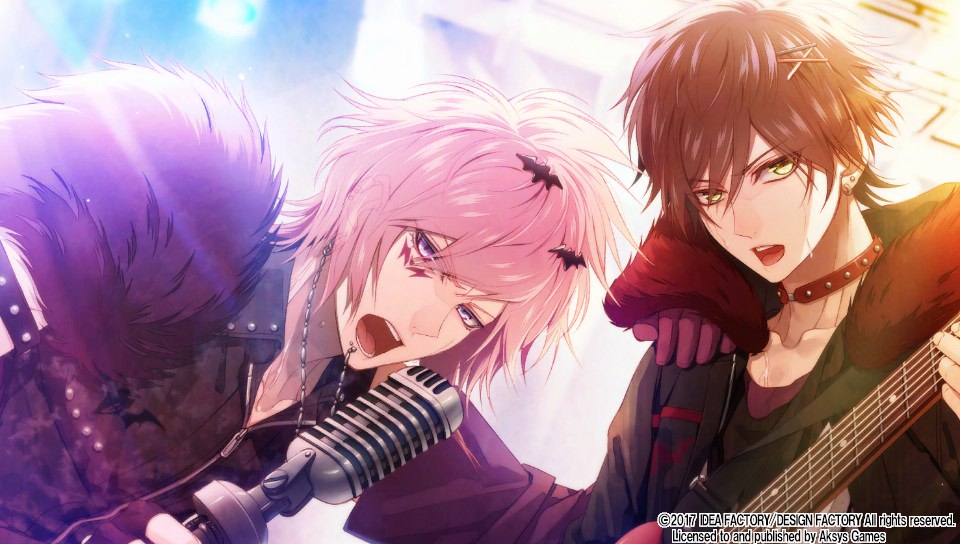 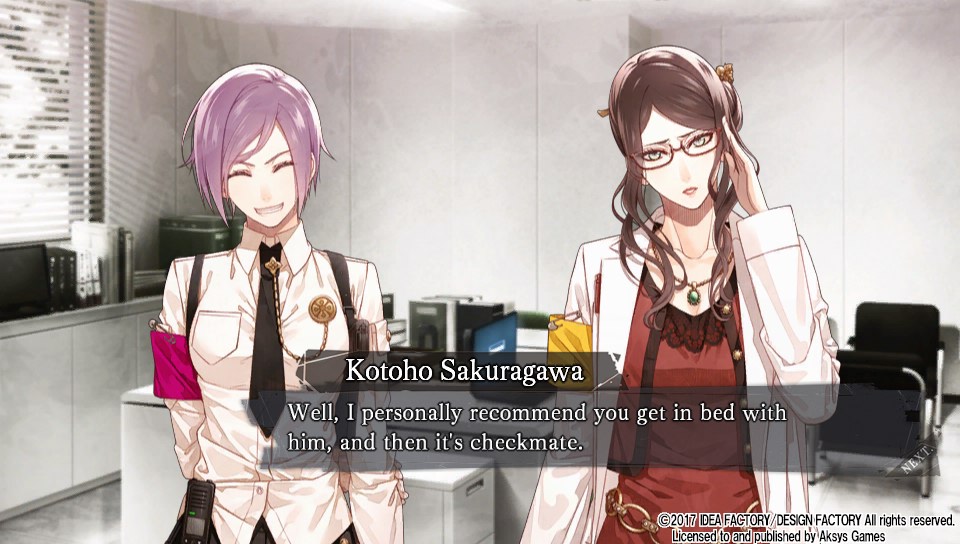 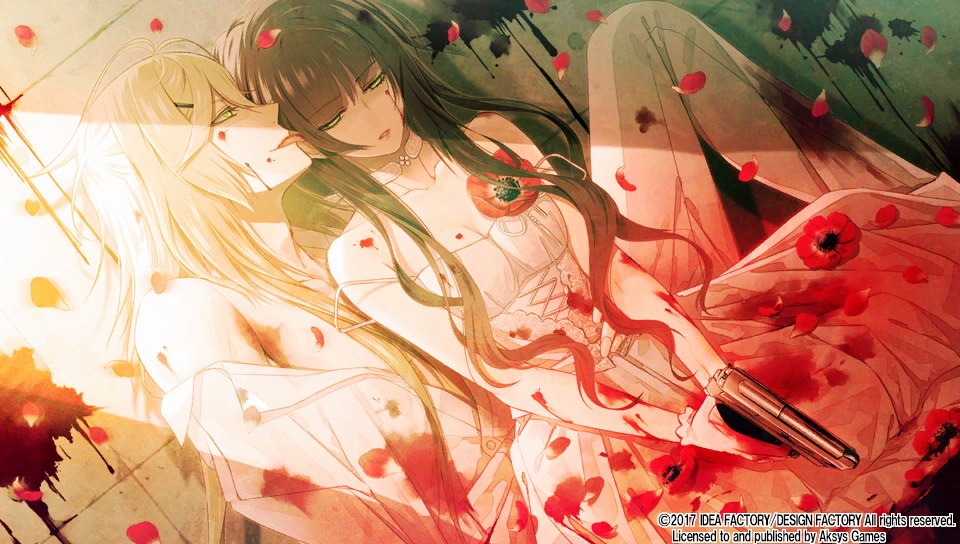 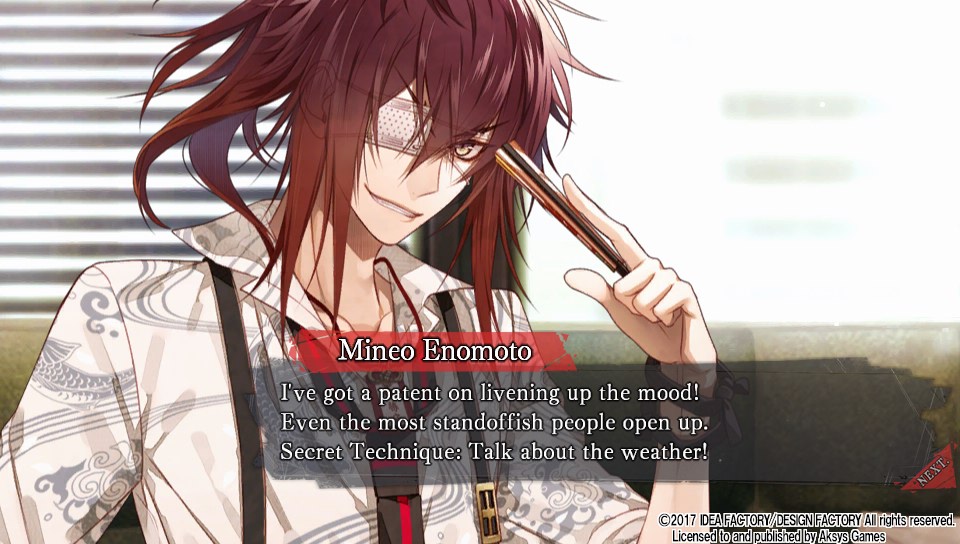 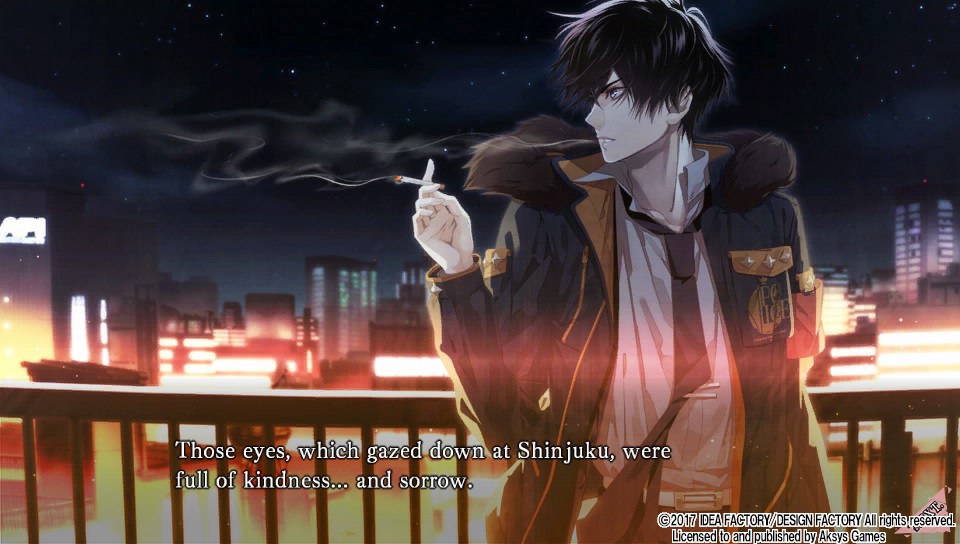