Nostalgia is an emotion often referenced, but rarely thoroughly explored. By definition, nostalgia is a painful experience, a dull burning deep in the back of your mind, creating a yearning for what was, for your lost innocence, and urging you to seek out ‘the thing’ that will make you feel comfortable again. The thing with nostalgia is, we never fill that need. We are always searching, always yearning, and forever learning to live with it. 2064: Read Only Memories evokes this emotion ten-fold. From the 8-bit visuals to the similarly compiled soundtrack, in the troubled port, once cancelled and then miraculously revived, the very existence of 2064 ROM is soaked in aching hope.

The setting is 2064, Neo-San Francisco. You are a small-time journalist, biding your time until your big break finally decides to make its glorious entrance. But everything changes one dark December night when your apartment is broken into, and subsequently cleaned and organized, by a strange ROM, short for ‘Relationship and Organizational Managers’ and generally amounting to robot personal assistants, most of the time… But this ROM has a name, is scared and alone, and is asking for your help.

The intruder introduces themselves as Turing, while simultaneously apologizing for failing to properly optimize your laptop while you were sleeping. Their creator and only companion in this world has been kidnapped and, as one with high-grade processing power would, they have run the algorithms and determined that you are the most likely candidate to be in a position to help. And so, you embark on this journey with your sapient robot acquaintance, neither of you having the slightest clue what will befall you.

Attempting to review a story that sits firmly in the realm of the existential creates its own issues. It is surprisingly difficult to discuss any portion of the story without lessening the impact it may have on an individual. Much of the experience with 2064 ROM is dependent upon the player’s willingness to dive in with no reservations and as little knowledge as possible. The way in which the story simulates building a relationship amidst conflict is striking. The emotions, and the strength with which you experience them whenever those close to you are suffering, are surprisingly real. For this reason, I’ve decided to avoid any specifics regarding the narrative, as I truly believe its strength lies in the personal nature of discovery.

2064 ROM is a nice mix between a visual novel and an adventure game, what I’ve seen called a graphic adventure game. One might even just call it an adventure game from the start, but I found that there was a bit more volume in dialogue options when compared to some of the more recent adventure games I’ve tried playing. But, true to the adventure genre, I still ran into a couple puzzles that seemed solely based on random guesswork. As I am not the most well-versed in adventure games, I may just be completely missing the logic, or perhaps the guesswork is even a joke on adventure game logic to begin with. I’ll admit, if the latter is that case, that’s pretty hilarious…

In fact, I really wouldn’t put such a gag past the creators, as the game is littered with nerdy references, complete with video game and anime terminology and mannerisms. I’ve got a sneaking suspicion that someone here is an otaku…

The overall humor throughout is witty and certainly appreciated, as the subject matter is often painfully dark. Using the personal attachment that is bound to exist for the player, the small respite these moments of light-hearted banter bring is essential in weaving a full and believable world.

While a large portion of any action within the game is portrayed more in text than in visuals, the minimalist sound effects help to fully flesh out the atmosphere, indicating a reaction to something that was just said or simply adding to the scene.

But the true star of the show is the soundtrack. I truly believe I am not overstating this when I say that the music is phenomenal and could not be more successful in setting the tone and bringing the story to life. I’m not sure if this was intentional, but the nostalgic nature of the soundtrack was instrumental in binding me to the characters and situation. In a way, the music is the largest factor in creating the personal bonds with the inhabitants of this world, by reaching deep inside of me and drawing out my strongest desire to create something better. Any given situation is defined by the accompanying music, and I often found myself pausing to reflect on what had just been said while letting the glorious melodies draw me away to deeply philosophical realms.

The 8-bit visuals are stunning and convey the tone with expertise in every situation. The color scheme is a wonderful call-back to the neon-soaked 80’s, complete with wacky hairstyles and bomber jackets galore. It reminds me of sci-fi movies I grew up on, attempting to visualize the future, but still beholden to the fashion sensibilities of the time. Here are multiple triggers for nostalgia, though it is only the tip of the iceberg.

Character design is similarly joyous, bringing each individual to life and adding depth to their already well- thought out backstories. I found myself meeting new people, making a snap judgement based on looks and the tropes invariably attached, only to learn quite quickly, and occasionally painfully, that such perceptions were far too shallow.

One such example would be a human-cat hybrid who, on the surface appearing to have taken their nyan-nyan obsession a bit too far, wastes no time in shattering that concept while swiftly making you question why you would have assumed such a thing in the first place. Each encounter brought a new chance to delve into the life of a stranger. To see their surface and eventually have their desires, fears, weaknesses, their deepest selves, revealed to you. In many games, this kind of character progression can come off as contrived, a mechanic existing simply to exhibit forward movement through the story. But in 2064, each person feels unique and natural. Details are revealed in the time of that individual. It emulates the flow of a real relationship and consequently feels similarly rewarding.

One of the complaints I could have is that, unlike other visual novels, there is no form of auto-dialogue or text skipping. This can get especially tiring when attempting multiple endings or the platinum, as it seems that options available towards the end are determined by decisions made within the first half of the game. This means that you may need to fully play through the game multiple times in order to achieve 100% completion. I had to suffer through this even in a situation where I had to retry a section after hitting one of the few fail-states. Unfortunately, the text also doesn’t progress at the speed one may be used to, heightening any frustration you may already be experiencing due to retrying or trophy hunting.

In relation to retrying, while the game seemed mechanically sound the majority of the time, I experienced two crashes during my playthroughs. There was one hard crash near the end of the game during what seemed like a fairly taxing sequence. The other one occurred when hitting continue after loading to the menu after completing the game. This was more of a soft crash, where the screen just went blank, but the music continued to play. While it was a nice little respite for a moment, a chance to reflect and just enjoy the song, it was nevertheless still a crash. Fortunately, you are reminded within the game to save often, and this is advice I would suggest following, if only as a precaution.

I only achieved a couple endings, though I believe one of these could be called the ‘true ending’. There are two reasons I didn’t push for obtaining more. One of these is the mechanics in the game not necessarily being the most replay-friendly. The other would be the requirements for reaching some endings. I tend to play games like this using my own personality. I’ve always felt this method provided the most fluid experience, as the characters should, in theory, then react to you as one might expect in real life. When checking on some of the necessary actions, I found that many of them had to do with purposely upsetting everyone you meet in the game. To be honest, this has just never felt right to me. Trying to approach a narrative like a checklist has always been painful, and the stronger the personal connection to that narrative, the more unlikely it is that I will be willing to treat the story like code. I rarely pick a game back up after reaching the true ending. I play open world games for twice the length of time as those around me, as I have to finish everything I possibly can before reaching the end. It would make no sense to reach a conclusion, only to load back in and act like it never happened! I have the same problem with visual novels, particularly when there is a strong connection with the story. To go against my natural instincts, intentionally, is the perfect way to break a narrative.

While there were many other releases and ports of this game, for me, the dogged struggle and ultimate triumph to release on the Vita is inherently woven into the game itself and flows right into the themes of 2064.

My head aches with the flurry of existential questions whirling around. Incomplete, incompletable. A sort of restlessness that always exists deep inside but must be ignored the majority of the time in order to make it through each day. But sometimes, that pain is welcome, is what makes one feel alive. Questioning one’s existence is the very definition of sapience in action. To avoid that completely is to deny this treasure, is to deny the only purpose we can ever truly know.

2064: ROM is a story about identity, of finding oneself and one’s purpose. Of learning about the world around you and fighting desperately to discover where you belong. Of asking questions and seeking answers, and ultimately finding the truth, even if it wasn’t what you were hoping it would be. 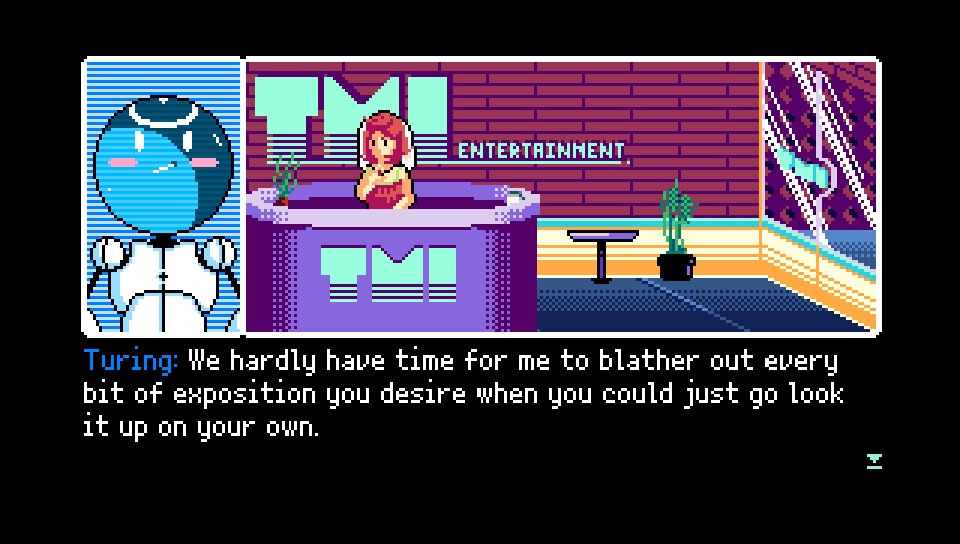 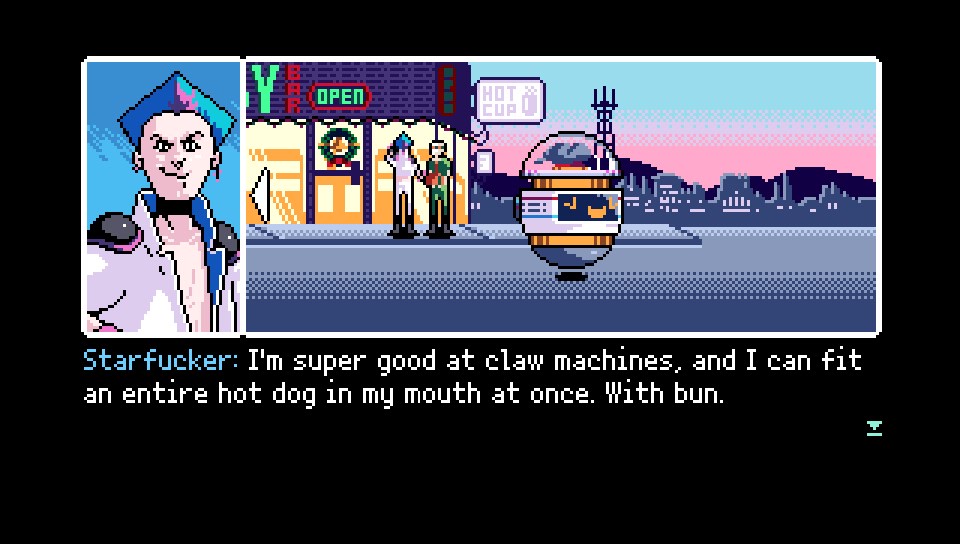 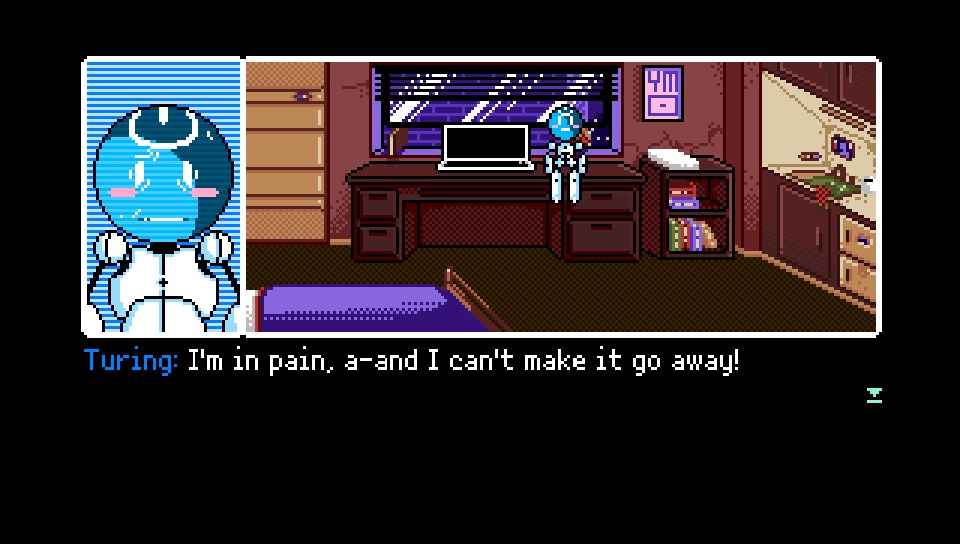 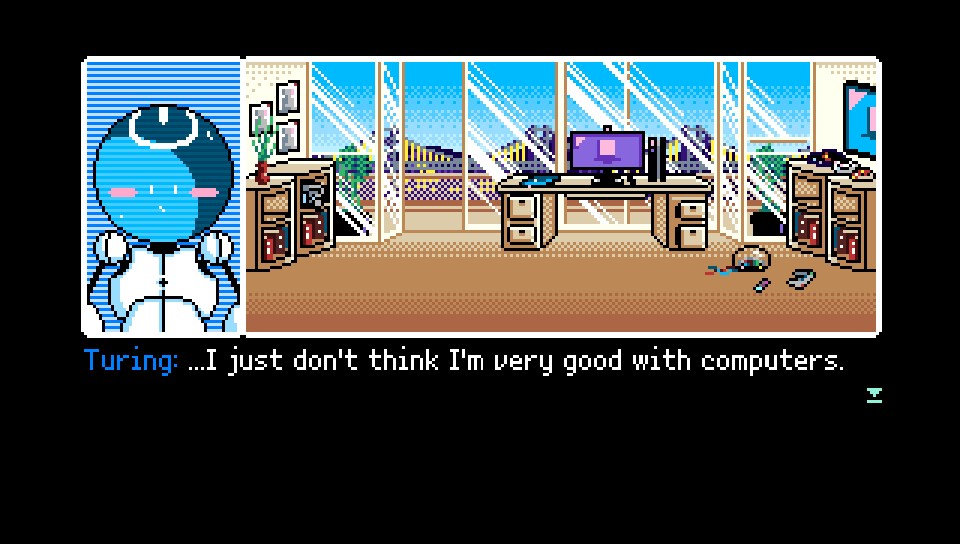