Okunezato, a town chained in time, mired in mystery, in sadness and loss, and the town in which Ichika’s brother went missing a year ago. When a childhood friend asks if she’d like to come along with him on a trip to Okunezato she is certain to not pass up the opportunity to pick up the pieces of an investigation long gone cold. This may be the only chance for her to learn the truth.

The initial introduction to the game is done through a cryptic series of live-action, found-footage style sequences and brief nameless interactions dripping in foreboding. This opening in particular got me excited for what was to come, but I was ultimately disappointed in the final results, which failed to live up to the darkness and depth that I had begun to expect. 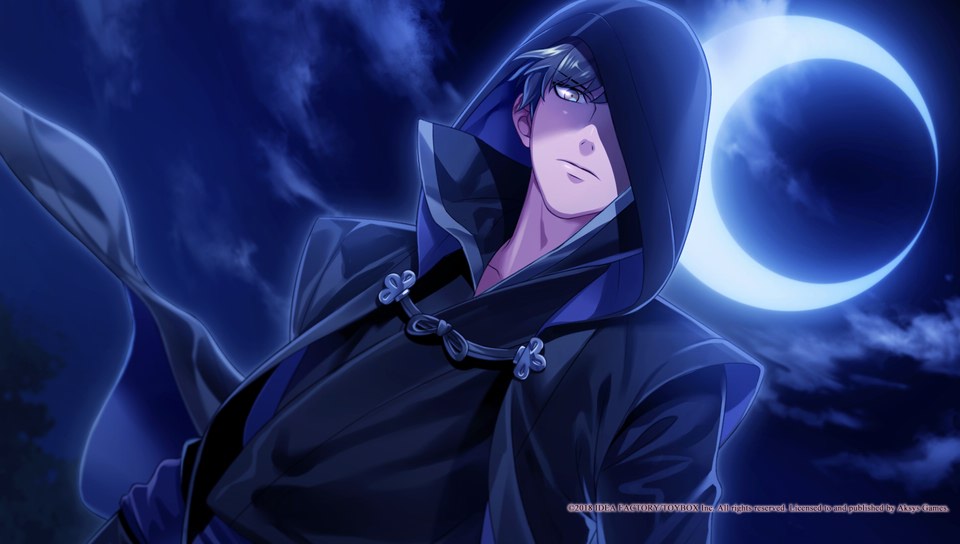 We are introduced to Ichika in the university lunch room, though we are initially within a ‘daydream’ of hers for a bit before returning to the real world, called back by childhood friend Hino. For Ichika, this spacing out is an extremely common occurrence, often happening in less than opportune moments, supposedly even potentially dangerous ones. Hino has taken it upon himself to protect Ichika, which includes ripping her from her reverie at times. Daydreaming out in public isn’t the safest thing to do after all. Ichika comes off as whimsical and aloof, though there are moments where it seems that this may just be a state she has resigned herself to instead of something she proudly owns as part of her identity. She also has a hard time remembering a large portion of her childhood and this fact has always bugged her, at least as far as she can remember. The one thing that has always shone brightly through the fog of memory is her brother, Hanate, and her deep love for him. 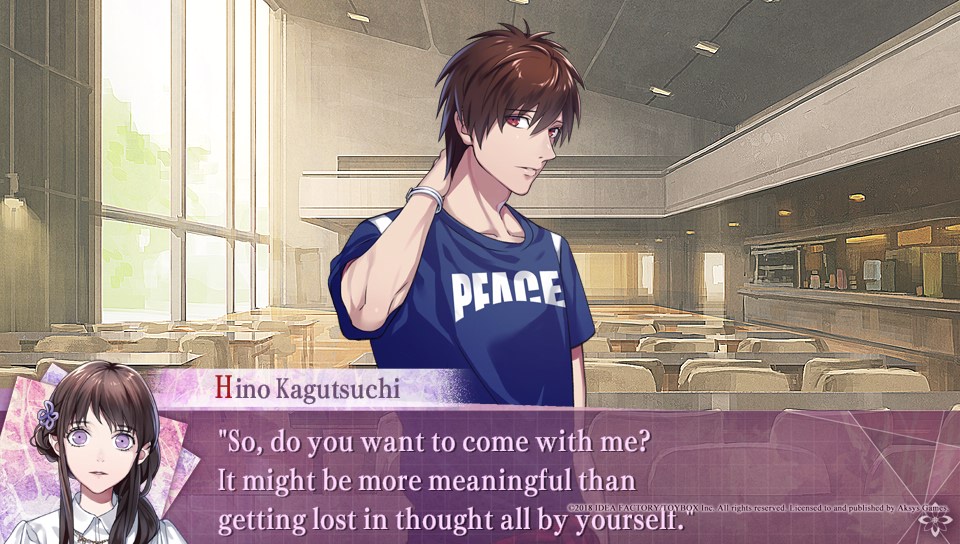 After rousing Ichika, Hino mentions that he is heading to Okunezato, a rural town steeped in mystery and the subject of a fan site, the Okunezato Supernatural Club, whose objective is to research said mysteries. The admin has recently put together an IRL meetup for the club of which Hino is a member. In this moment, we learn of your brother and how he went missing a year ago in Okunezato. The investigation had gone cold and been closed with no resolution, and this could be the one chance for you to obtain some information and perhaps find the truth regarding your brother’s disappearance. 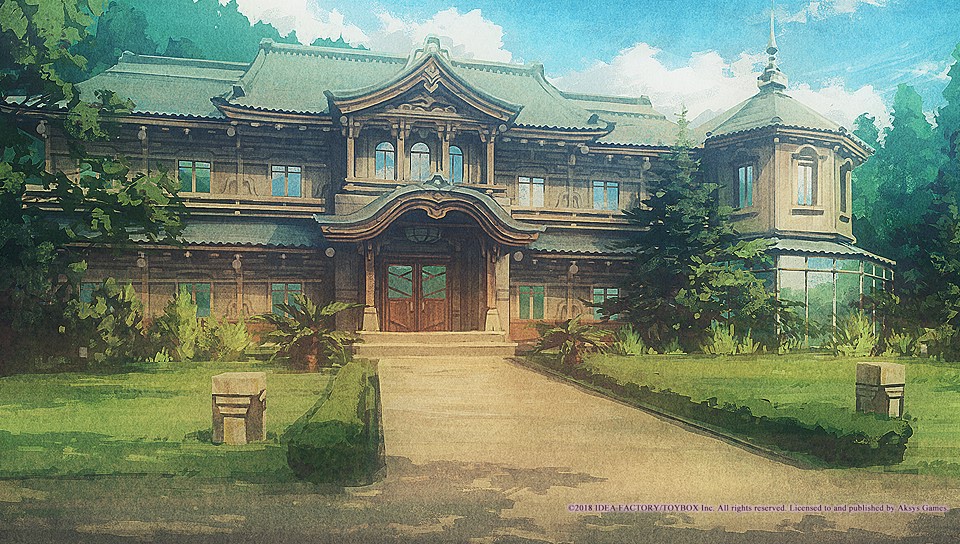 Once arriving in Okunezato, you check into the only hotel in town, the Fuurinkan. Through a series of events and the fact that the hotel is fully booked due to the club gathering, you find yourself temporarily employed by the hotel in exchange for the cost of lodging. Here is where you meet your cast of characters with whom you will spend the rest of the game. First is Yua, a now-coworker with a love for video games and making references of such whenever possible. Yuki is another hotel employee, despite still being in middle school. Like many intelligent children, he longs to be an adult as soon as possible and this job is a step towards his goal as he does nearly everything in the hotel, including scheduling and management. I found this character extremely endearing and relatable in his struggle to grow up while the adults around him deny him of the satisfaction of mature praise. There are only a couple guests with no connection to the Supernatural club: a mysterious writer, Chikage Kurasama, is staying at the hotel and has a habit of darkening any room he enters with his curmudgeonly personality; and a slippery photographer named Kagura Tsukuyomi.

While there are multiple romance options, they all clearly fit into their stereotypical box fairly quickly. Hino Kagutsuchi, your childhood friend who clearly has feelings for you, is the slightly whimsical type who functions mainly through his emotions. Sosuke is the neurotic type, the genius who has trouble emotional connecting to others but has a hidden soft side. Toa is the extremely awkward and shy type, one to whom you are drawn largely due to the army of cats that seem to surround him at all times. And then there’s Isora, my least favorite stereotype. He is the guy who just cares a bit too much and is perhaps a bit too insecure, to the point where he comes off as creepy and obsessive. And then there’s the ultimate goal, Yuzuki Murakuma. He is the elusive owner of the Fuurinkan and the source of much displeasure amongst your coworkers. He hardly seems to run anything at the hotel, providing a myriad of work experience for Yuki, and his rare appearances seem to always be accompanied by a terse session of beratement towards the first person to catch his eye. But this unapproachable demeanor only served to draw my curiosity and I eagerly moved through the storyline with a slight impatience for when I could learn more about him.

Sticking to stereotype is not necessarily a bad thing and can certainly be comforting much of the time. Many of the characters have tiny variations that are extremely endearing. This is especially my experience with Hino. While I enjoyed the storylines of some of the others more, I couldn’t help but feel that Hino had the most care put into his personality. He is, on the surface, your typical sports dude: physically fit, insecure about his intelligence, and oddly beholden to the concept of chivalry. Underneath that veneer of manliness, though, lies what I can only describe as a hardcore otaku. Watching him flip out in joy when meeting the mascot of Okunezato (the Okune Panda) or spending embarrassing amounts of money on trinkets of said mascot, these were some of the most purely enjoyable sequences for me. Hino was the first route I completed and due to his air of sincere earnestness, after that, I felt slightly guilty leaving Hino behind. 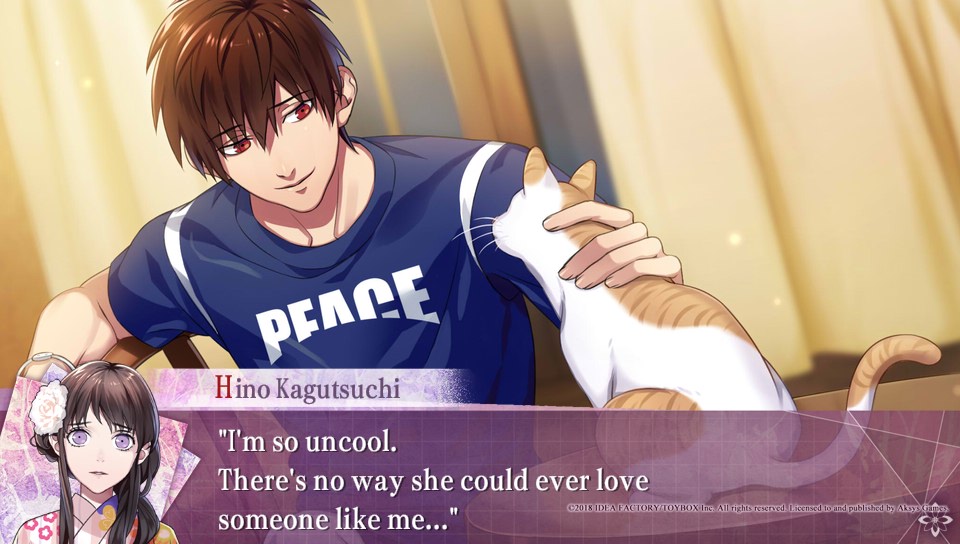 Mechanically, 7’scarlet is not as easily navigated as the other VN released through Aksys recently. There is no route map or scenario selection immediately accessible from within the game. You will mostly navigate via manual saves. Another option is loading a ‘new’ game and selecting one of the few scenarios listed (about 4 per character route), which I only really used in particular circumstances where the route required it. At least with the saves it also includes the recent dialogue lines or the choices you saved on, as well as a shot of the person’s route the save comes from, and those functions make it fairly simple to navigate and find the save you need at any given point. There is also the option to turn on visual cues for when you select the correct response to increase affection with a character. I can’t speak fully to the effectiveness of this, as I did use a guide for nearly the whole game after finishing the first route, but it seems it could potentially help one complete all the endings without needing to use a guide that often, if at all. I was able to platinum the game with no issue of getting locked out, though I have seen a few statements out there claiming that it is possible to lock yourself out of endings. 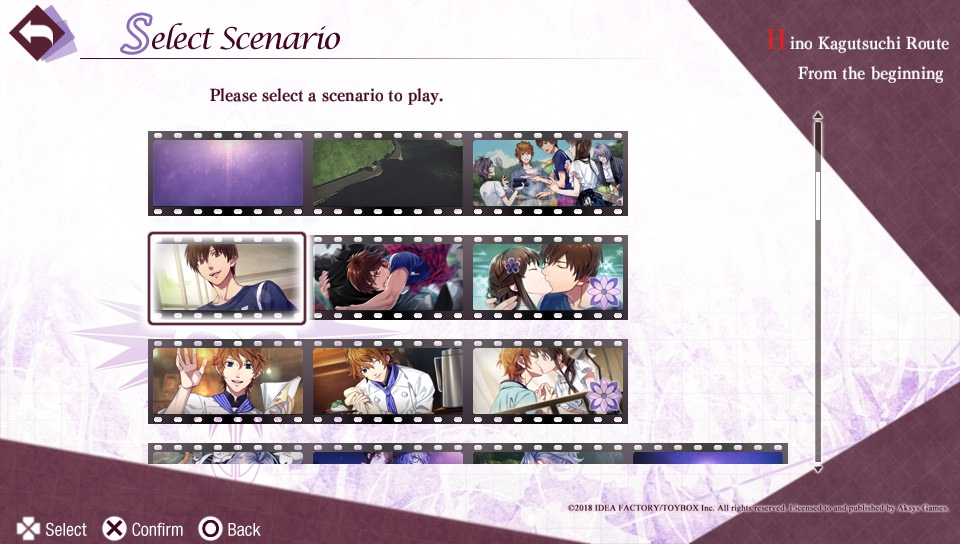 The visuals were a bit misleading at first, as the opening sequence was composed of completely live-action shots of nature and the beginning of the game had a few 3D environments. But after the first 15 minutes or so, and after 30 minutes of continued use of generic static animation, I came to the realization that the beginning was not representative of the majority of the game. Despite this confusion, the visuals overall were enjoyable, with some nice lighting effects at times that went a bit above and beyond other visual novels and the pleasing watercolor-esque style created an atmosphere of bleary darkness. The character animations are static while speaking, but the switch between facial expressions occurs more often than usual and that was very welcome. 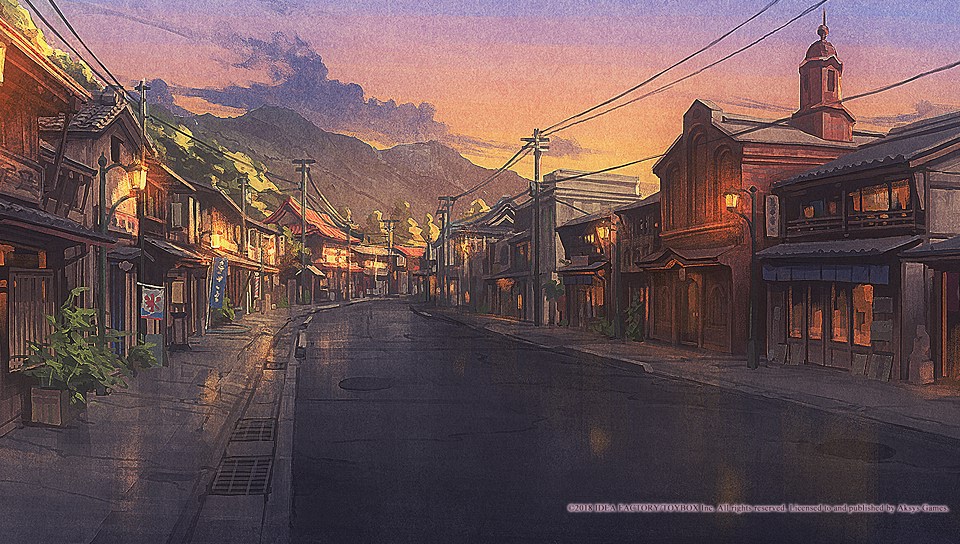 The music is good, but not great, and the main purpose seems to be to create atmosphere as opposed to leaving any lasting impression. If this in fact is the goal, they were successful. No single track stood out to me, but then there also were never any moments where the music overtook the scene in any negative capacity either. I’d be lying if I said I wasn’t a little disappointed when there wasn’t actually a song from the often-mentioned famous artist A-TO at the conclusion of the True Ending. My expectations were probably partially due to seeing items in the credits that I totally thought implied a musical number. I do understand the concept of staying vague when trying to make a point. It would be awkward if the song you use is not liked by the players, as that would potentially devalue the moment. But it seems like the type of person playing these games can’t be that difficult to predict and I’m not sure replacing awkwardness with disappointment was a valuable trade. 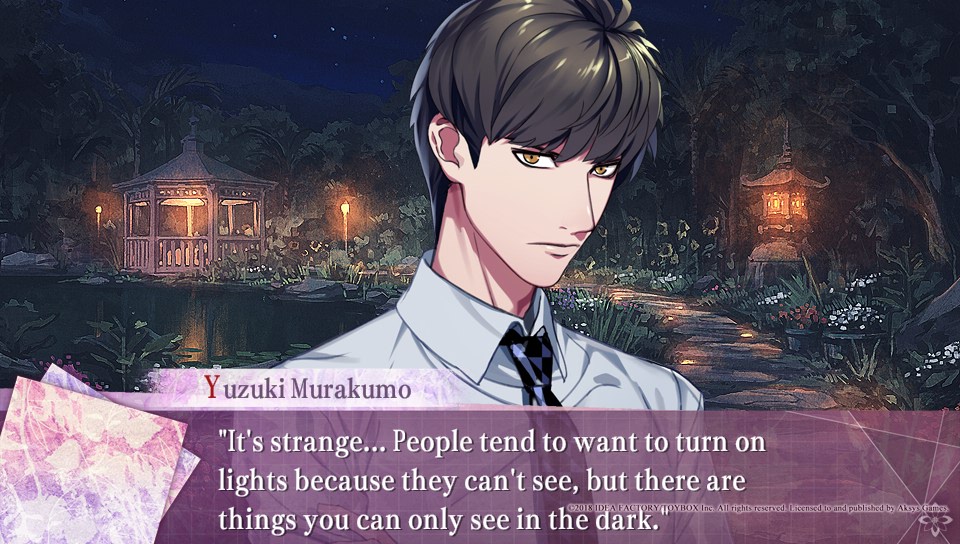 I found myself struggling to find much satisfaction in the ending from a relationship standpoint. While the mystery portion provides a full conclusion, the character progression of Ichika leaves something to be desired. This game almost feels like 2 different games shoved together. For the first half you have a serviceable otome, where the focus is clearly on the relationships. Then the second half unlocks ‘romance’ options with characters who know far more about this town and the situation that you’ve found yourself in, bringing out the other game that is much more of a straightforward mystery visual novel. I really dig the story here and at times I felt like the otome aspect was holding back the progression and flow. I do wonder if either aspect would have been more functional on its own. But together they seem to counter the other, making the end result less satisfying on either front. There were also a number of expectations, due mainly to how this game was marketed in which the producer of Deadly Premonition (and co-founder of Toybox), Tomio Kanazawa, is mentioned whenever possible and where the first trailer for the game was the live-action opening sequence. 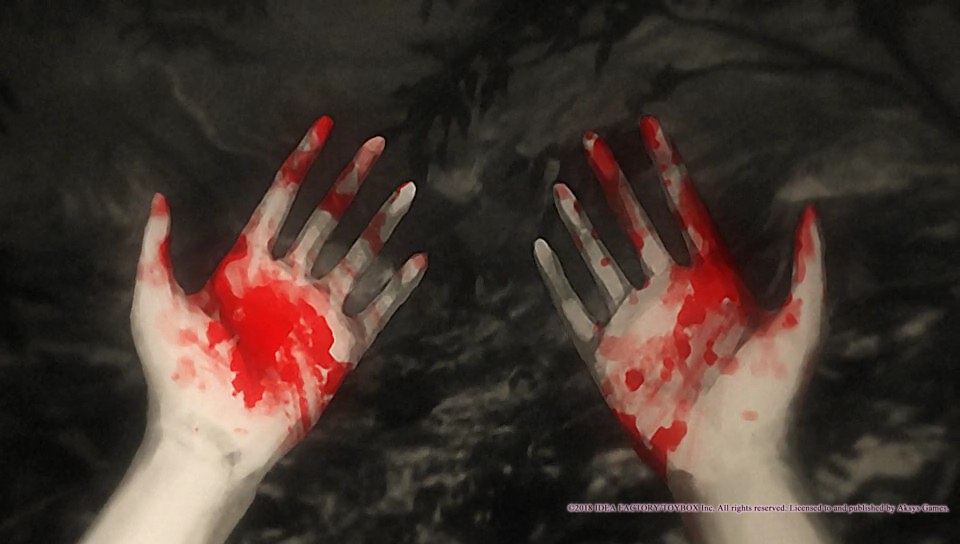 Expectations can often run amuck and I certainly fell victim to this here. That’s not to say that 7’scarlet is not worth playing. I believe it is. Though it may be lacking in cohesion or in further exploration into the individual characters, it also has many unique concepts in the mystery VN area that I truly enjoyed. If anything, my disappointment comes most from the fact that I truly believe there is something of value here but it simply didn’t quite manage to live up to its potential. I truly hope that perhaps future visual novels can take note of where this game missed the mark and build from there. If one keeps their expectations in check, I believe 7’scarlet can be an enjoyable casual otome experience with a small dose of small-town murder mystery, good with your favorite blanket and a good cup of tea. 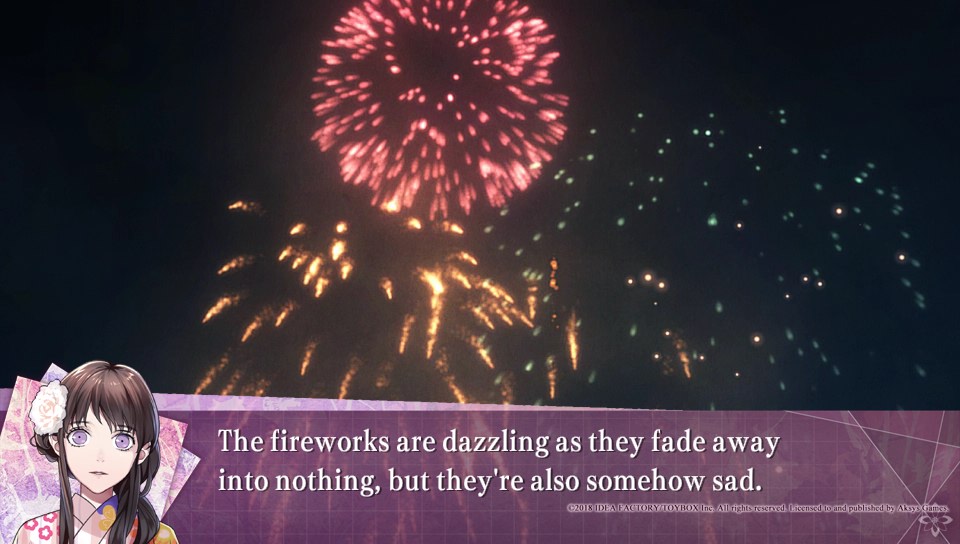 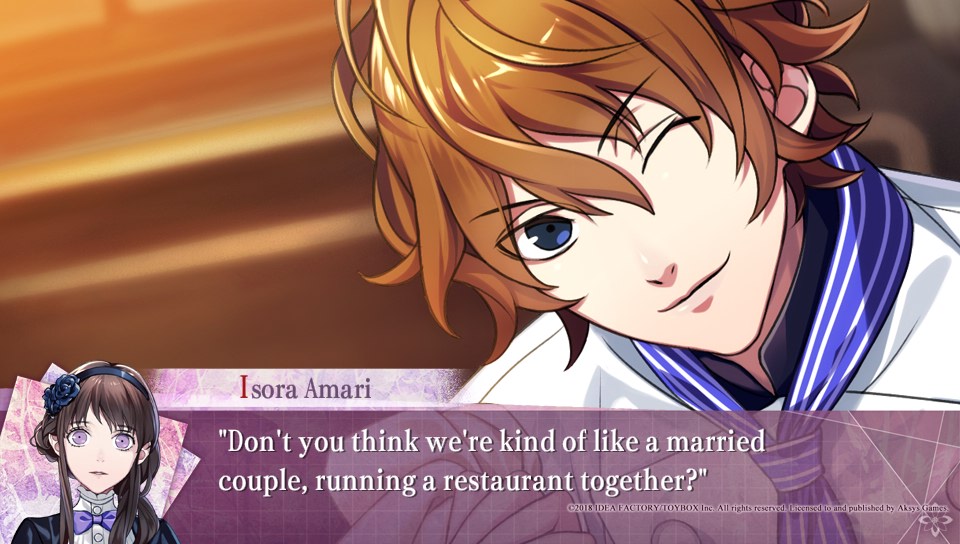 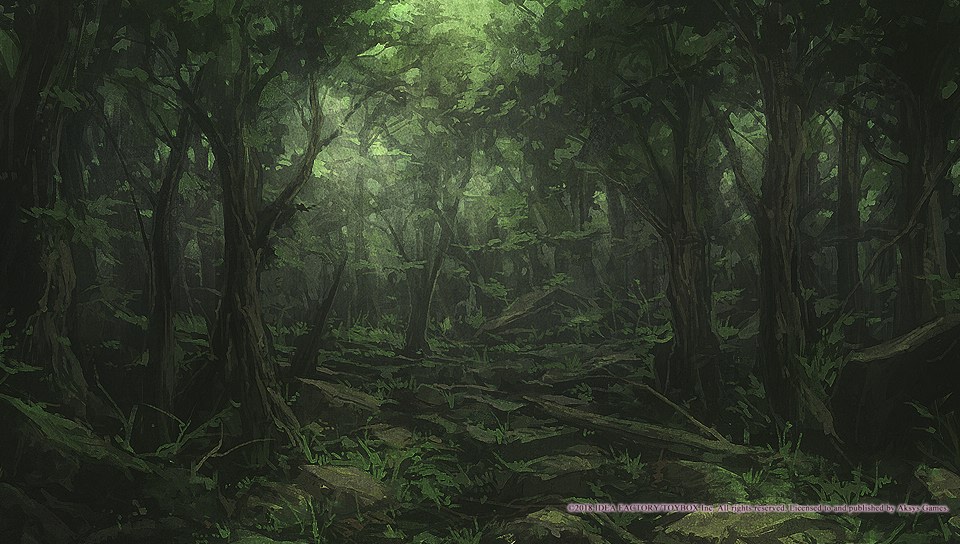 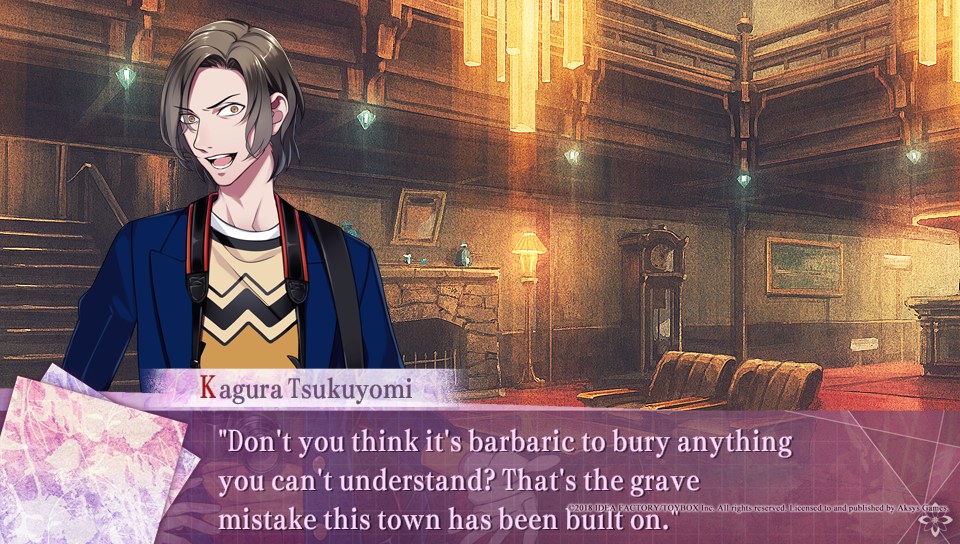 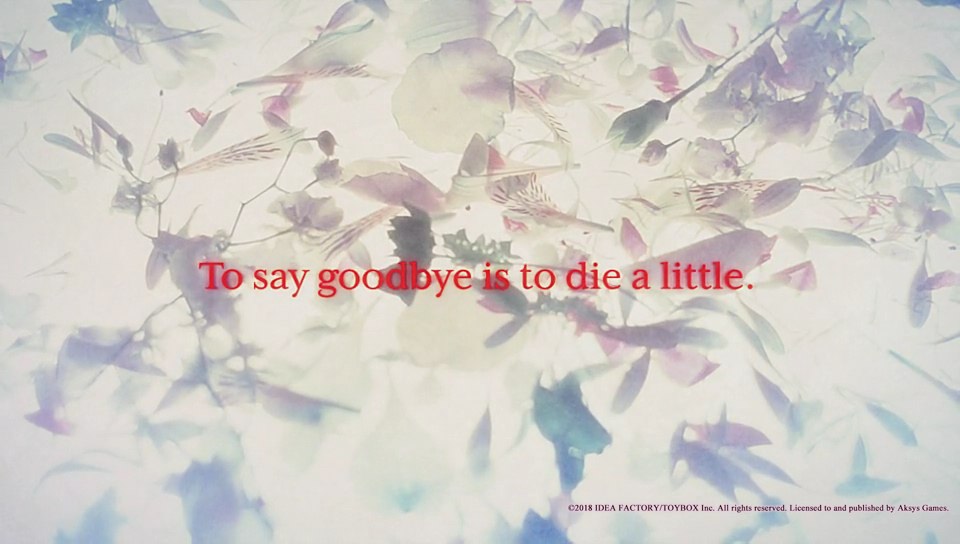 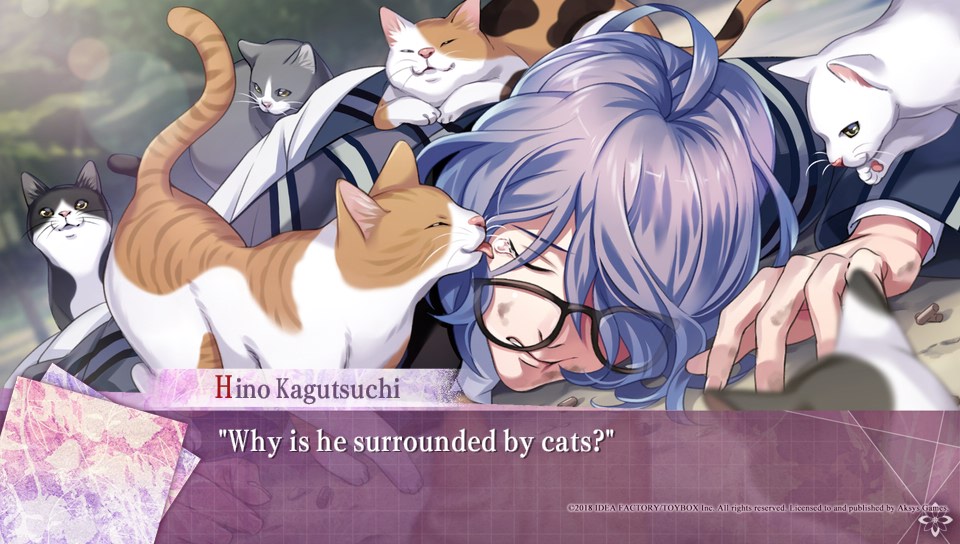 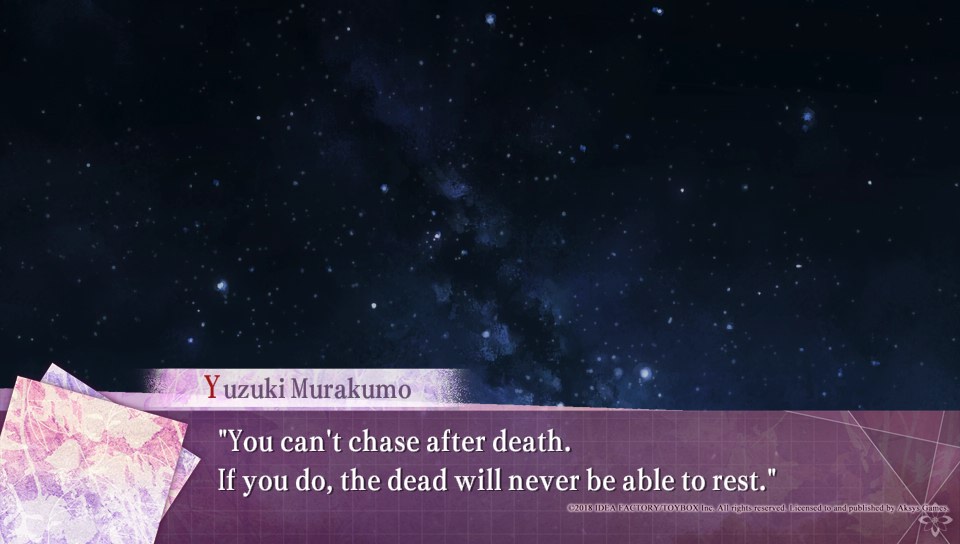