As we enter, your days of soldiering are put behind you, replaced by a noble purpose, to teach, to instruct, to guide. So you set out, eager to find those that desire your help, in hopes of creating a better world for those who follow. At least, I’m pretty sure that’s the premise here… 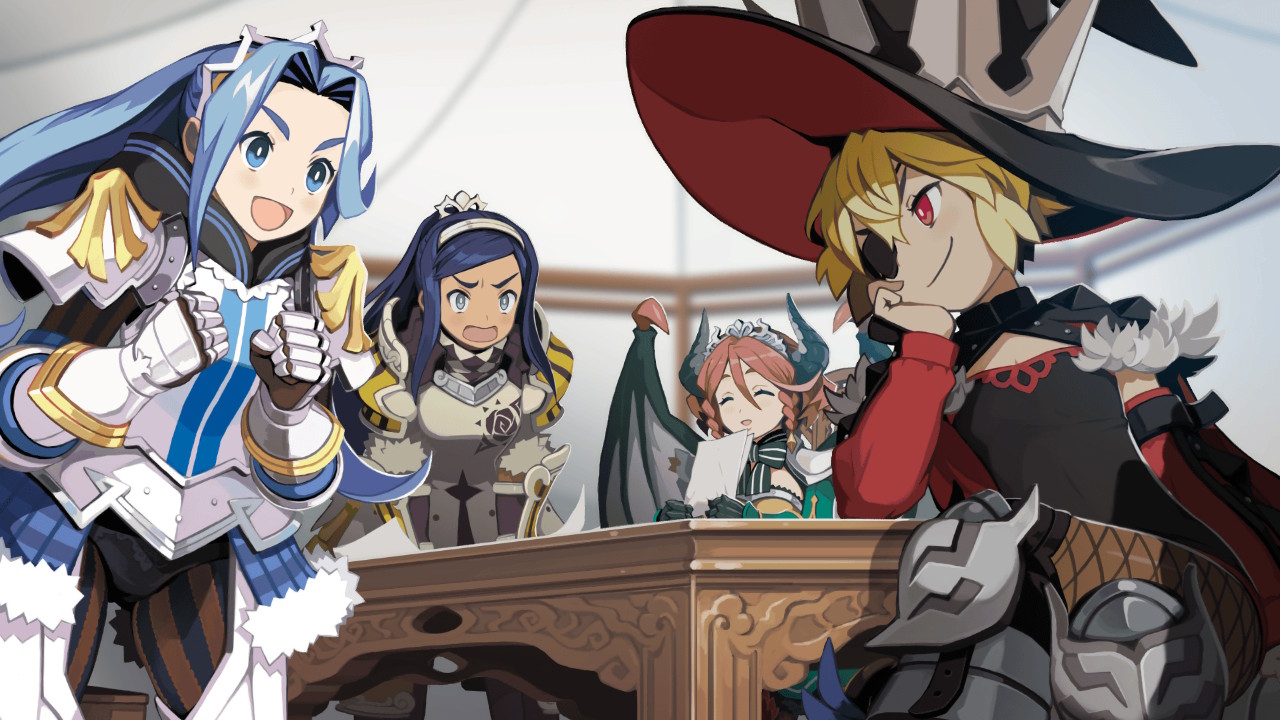 Immediately from the start menu you’re thrown into combat that, while displaying text on occasion that disappears as quickly and silently as it materialized, never actually indicates that this is the tutorial. I was instantly confused and had no idea what I needed to do. The game runs at full speed straight out of the gate, much like the elusive tutorial text. While you do eventually have the ability to go through the gameplay tutorial as many times as you’d like once you gain access to the Base Menu, that doesn’t really help when the text vanishes upon sight. I actually replayed the tutorial mission multiple times, taking screenshots while interacting at the bare minimum level, in order to read later. And that’s questionable design. The truly upsetting thing is the phrasing of the tutorial entries that can also be found later in the Base Menu and how completely useless they are. They are written as if they are your personal journal, but apparently you also think someone may read your journal in the future and you want to impress them with your wisdom, so everything is phrased in the most ridiculously vague manner. There is nothing in the game that just tells you how to do something. Just musings of the main character that are meant to serve as instruction but only ended up annoying me. If this is how this guy teaches, I feel sorry for these princesses. 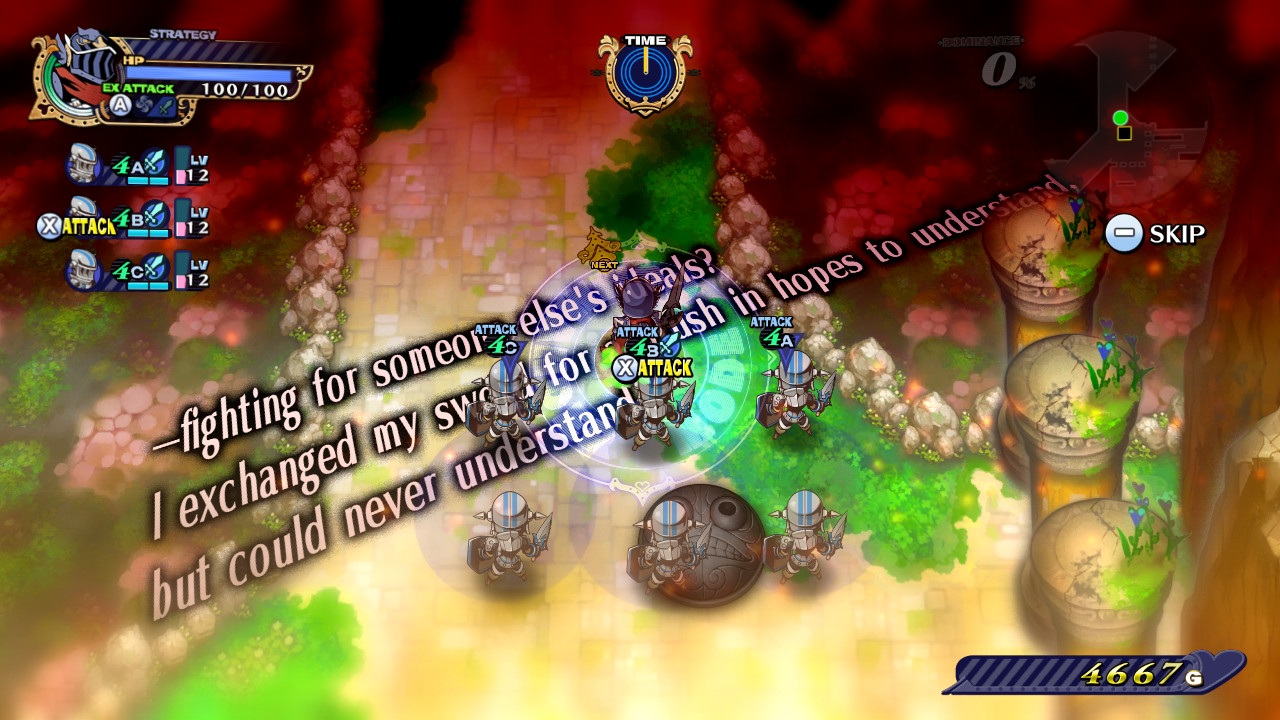 I don’t play strategy games most of the time, largely because they stress me the hell out. My entire work day is filled with a list of ever-growing tasks that need to be done but that I know are impossible to actually ever clear out or achieve at the level I require of myself. Similarly, strategy games tend to throw a pile of objectives at you that seem nearly, if not actually, impossible to complete with the efficiency and accuracy required of you. I assume that the workplace PTSD from which I suffer makes approaching these games difficult for me. But there are some games out there that totally nail the flow of actions that makes you feel like a badass just by doing the things, even if the result is not exactly what you had hoped for. The Princess Guide perhaps struggles in this area the most. I’m reminded of my first time, or I guess anytime, I played a musou game. I understand the general objectives and I can execute the basic combat mechanics. But I seemed to struggle every step of the way, especially at the beginning, even failing missions multiple times, yet I had no idea how to improve or what I might have been doing wrong.  The game begins to feel a bit deeper and at about 10 hours in I felt I mostly understood the systems and where I went wrong when I failed. Though I’m not sure how much this matters. When trying to describe the combat, I imagine a wading pool filled with inexplicable pulleys and levers, the random pulling of which is the only way to get out of the pool. As you move along in the game, that pool perhaps graduates to an exercise pool, maybe about 3.5 feet deep, and you’ve simply learned how to brute force your way out of the pool, through all the mechanisms, rather than knowing how to actually use them. 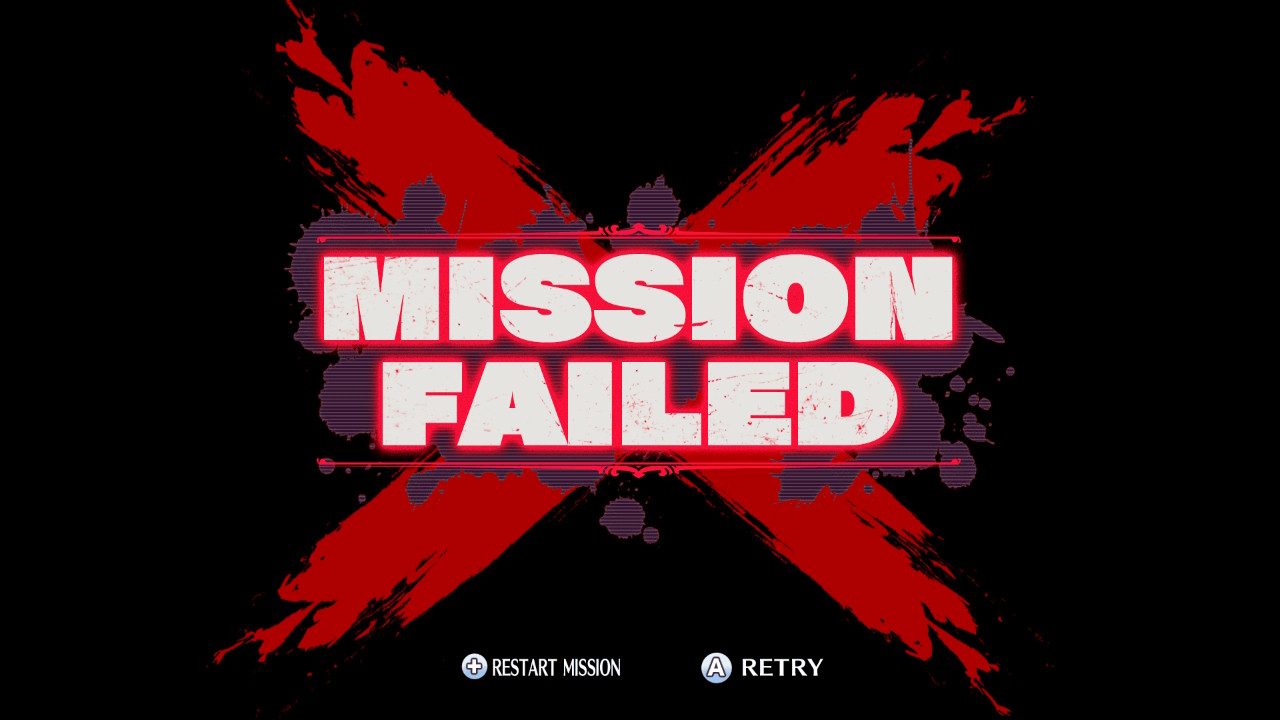 People often say that strategy games belong on PC, specifically because of the difference in control available with a mouse and keyboard in comparison to a controller, and I tend to agree. Many games, such as Civilization 6, have gotten around this issue by utilizing touch controls whenever available. This is why we see a bunch of successful strategy games on mobile. While the ‘strategy’ aspect of The Princess Guide is fairly light, I can say with absolutely no hesitation that it would have benefitted from utilizing touch controls. My chief frustrations always were tied to navigating the overworld map, moving squads around and attempting to open the menu I wanted when I wanted to do so. The only options are to use the joystick to scan across the map or to use the ‘quick selection’ function, which inexplicably would completely ignore active squads or missions on the map and simply snap between the few items immediately visible to you. This clearly obliterates the concept of ‘quickness’ and instead presents you with a new game to play: fighting the controls. The way in which you move through menus is cumbersome, requiring you to back out and go to a different section for tasks that are almost always connected. The labels for these menus are not necessarily straightforward in what they contain and I found myself having to select, back out, select something different (and on and on) so often that I basically stopped trying to find anything that wasn’t absolutely necessary. 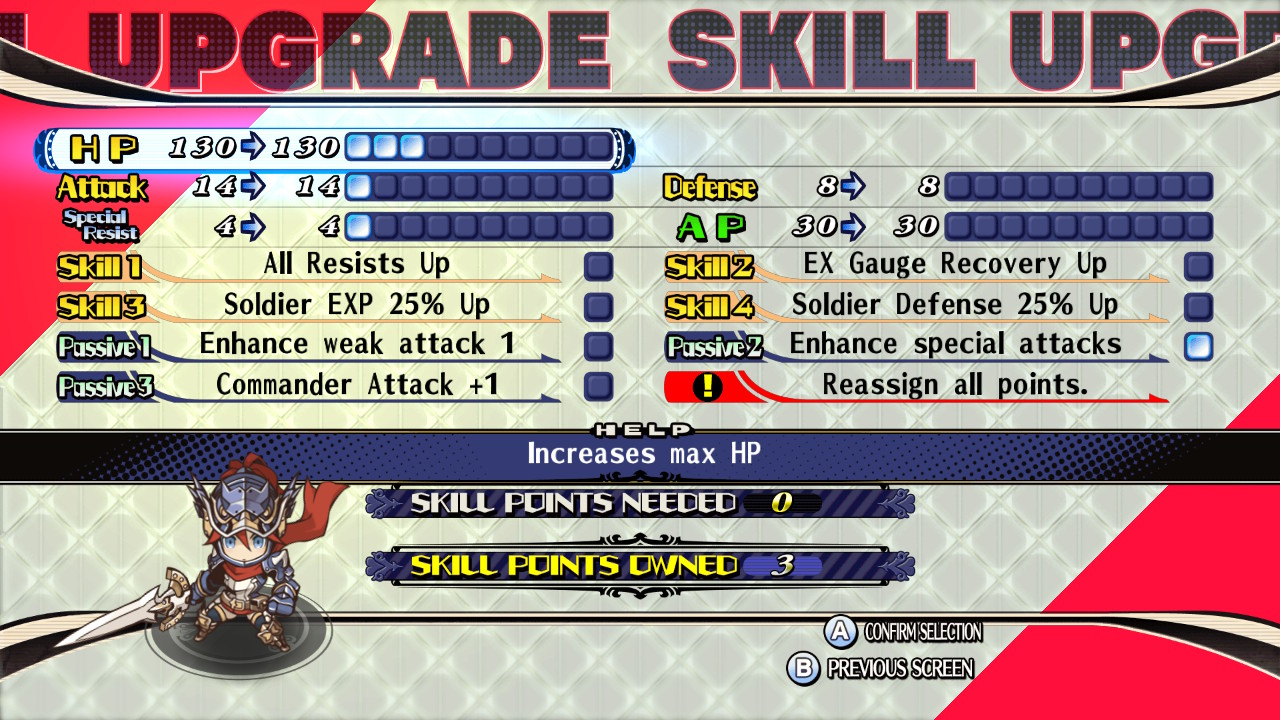 While the visuals are high-fidelity there are too many visual blunders for me to feel comfortable saying that this game looks good. The general combat screen is busy as hell, with some stats being duplicated in different areas and almost all of them being completely unexplained, difficult to decipher and often even challenging to read due to size and location. Whether this struggle is simply due to my inexperience with this genre or not is largely irrelevant, as it shouldn’t be that difficult to provide a basic explanation in-game. I would call it a weird design choice to have a heavy fog mostly everywhere except the exact middle of the screen or where your character is located, making it difficult to see what’s going on with your troops and approaching enemies. Another strange choice is the active character design. The characters bobble spasmodically when speaking, making it difficult to concentrate on the text and honestly kind of creeping me out. I genuinely thought that something was broken initially and that the game was running at 4X speed somehow, but with the speech sounding fairly normal that theory was quickly dispelled. 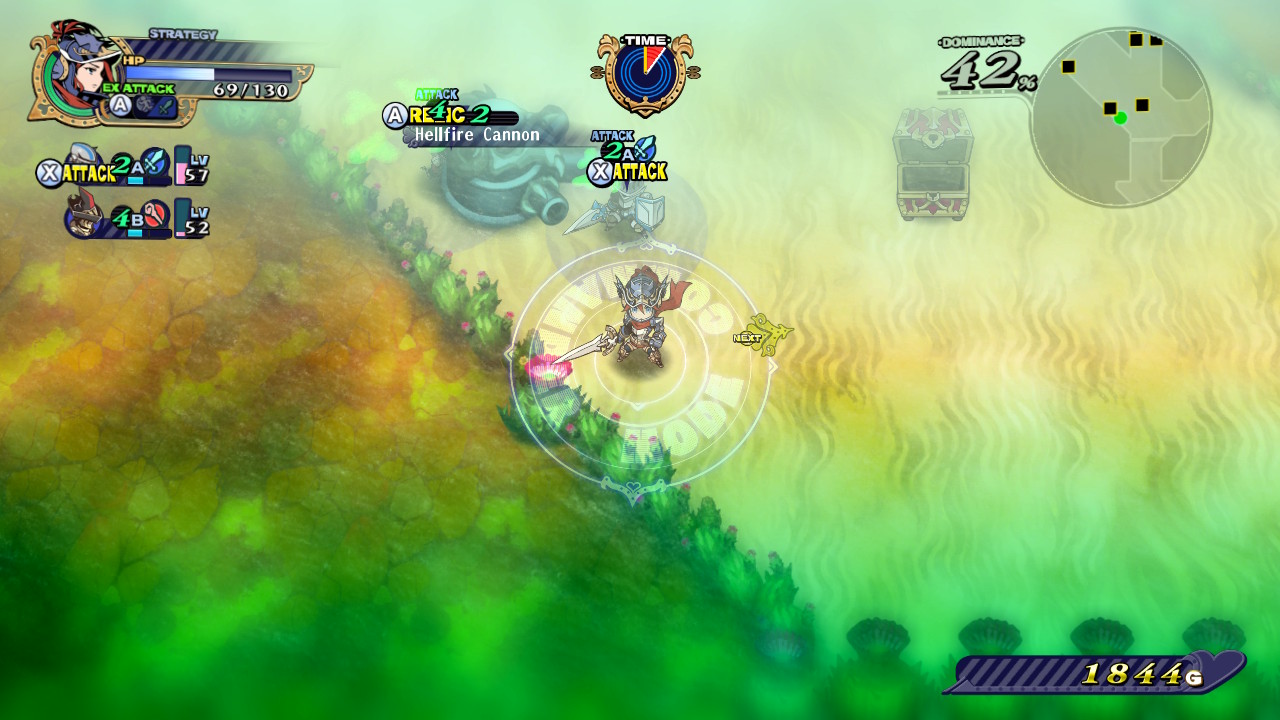 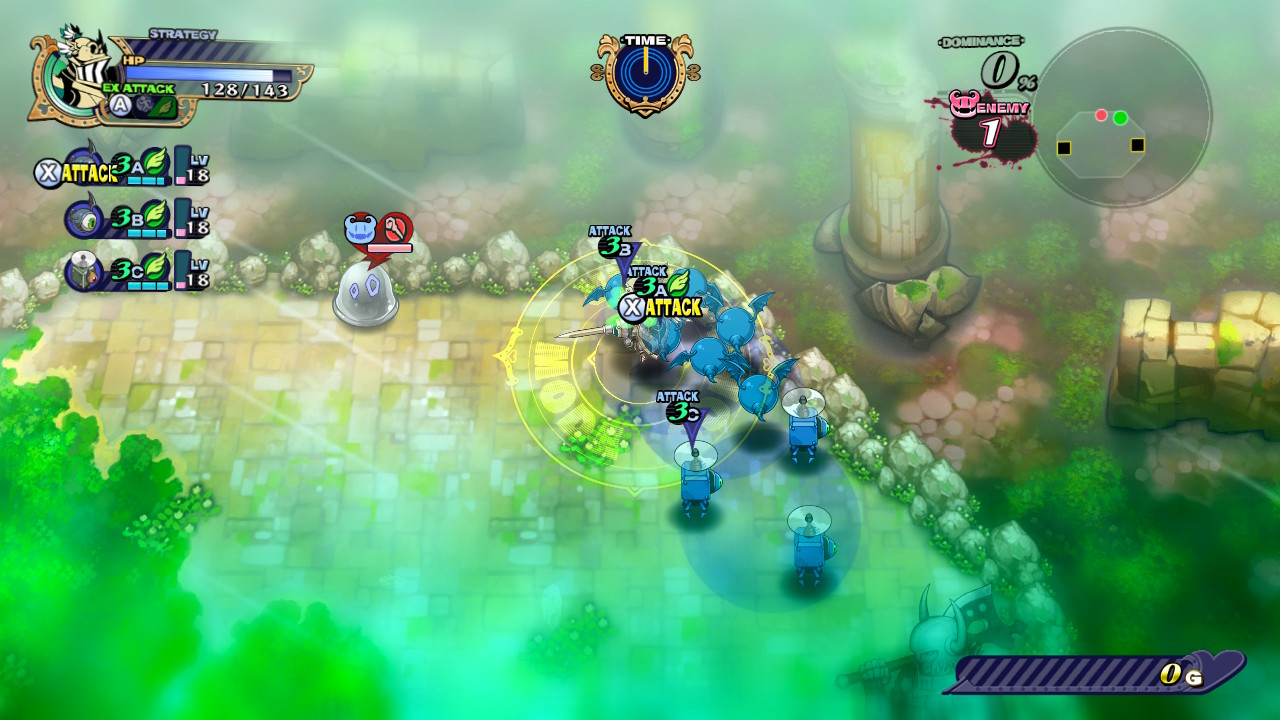 The story is…there. It serves as an explanation as to why you are doing what you are doing but does very little outside of this. You are a retired soldier, looking for some meaning in life. As part of your search you decide to journey through the four kingdoms in hopes of finding someone in need of tutelage. As it so happens, the ‘princess’ of each kingdom has her own personal reasons to seek assistance in this regard. You then mentor each princess in turn, eventually leading to them all coming together to defeat a monster of legend threatening everything. Outside of these general points I’d be hard pressed to provide any further detail. The presentation is so boring and vague that I had a hard time keeping any of it in my head. I just couldn’t be bothered to care. The princesses are riddled with personality traits so ridiculous that I fear I may have injured myself with the continuous, intense eye-rolling. There is very little to find charming in your students and even less depth. Add to this my generalized impatience from having to move through multiple menus before being able to do anything and the series of woefully short battles that peppered the game and I rarely had the focus to retain the bland dialogue inhabiting my screen. Though the story and dialogue are hopelessly mediocre, they do actually become casually interesting as you move closer to the climax. But this is sullied by the distracting character movement and, frankly, lazy NPC design. There were situations in which 2 townspeople were talking and the exact same character model was used for each. Or the situation where the characters were meant to be under attack and panicking, yet the character models didn’t even remotely portray this. One could maybe look at this as a wonderful example of camp but I simply didn’t have the patience for it, if it was. And then there was the hilarity of the credits where there was an entire section of characters with the exact same voice actor listed. I get this is low budget, and I actually don’t mind the ‘one person-multiple characters’ thing, but it really does drive the point home after all the other frustrations pile up. 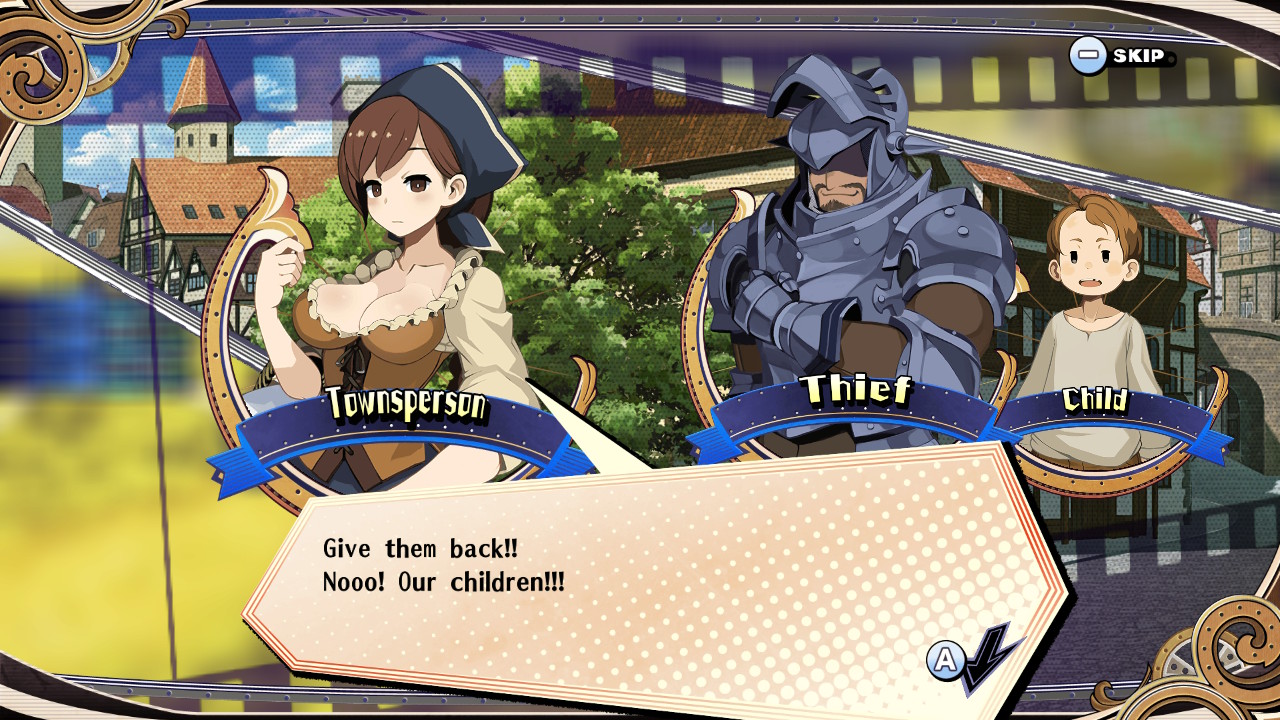 Training the princesses is the main purpose of the game and in this I was continually confused. In order to ‘teach’ you utilize Direct Guidance, in which you chastise or praise your princess during battle for varied result, 3 opportunities per battle to do so. The way you decide which one to employ is supposed to be based on the situation and the princess’s personality. If you do either when it doesn’t fit, I think that you may get less experience and the buff that can occur immediately in battle is less useful. I say ‘I think’ because I honestly have no idea. I know that sometimes I would do one or the other and the princess would be happy and a healing buff would be applied. In a situation where I don’t know the exact difference, I would make the same selection and the princess would be upset and something silly like increased stealth would be applied. I would try and guess, and maybe I could get it ‘right’ about 75% of the time, but I’ve never been a fan of vaguely explained, personality-based mechanics that are the entire basis of a game. Particularly when the ‘personalities’ provided are so shallow and never really fleshed out. In order to apply the experience gained in battle, the princess needs to be in the base, which means recalling her from the battlefield. This then starts a clock for when you can send them back out, which is generally around 10 minutes or so unless you fast forward the game. There are items that allow you to recall and immediately dispatch, but I only ever gained these by chance drops during combat. There is a way to ‘create’ items but I never understood how that worked and never seemed to have whatever one might need to actually create items. In fact, I think I only created one item in the whole of my playthrough. What all of this translates to is grinding the game to a halt in order to play the game. Again, questionable design. 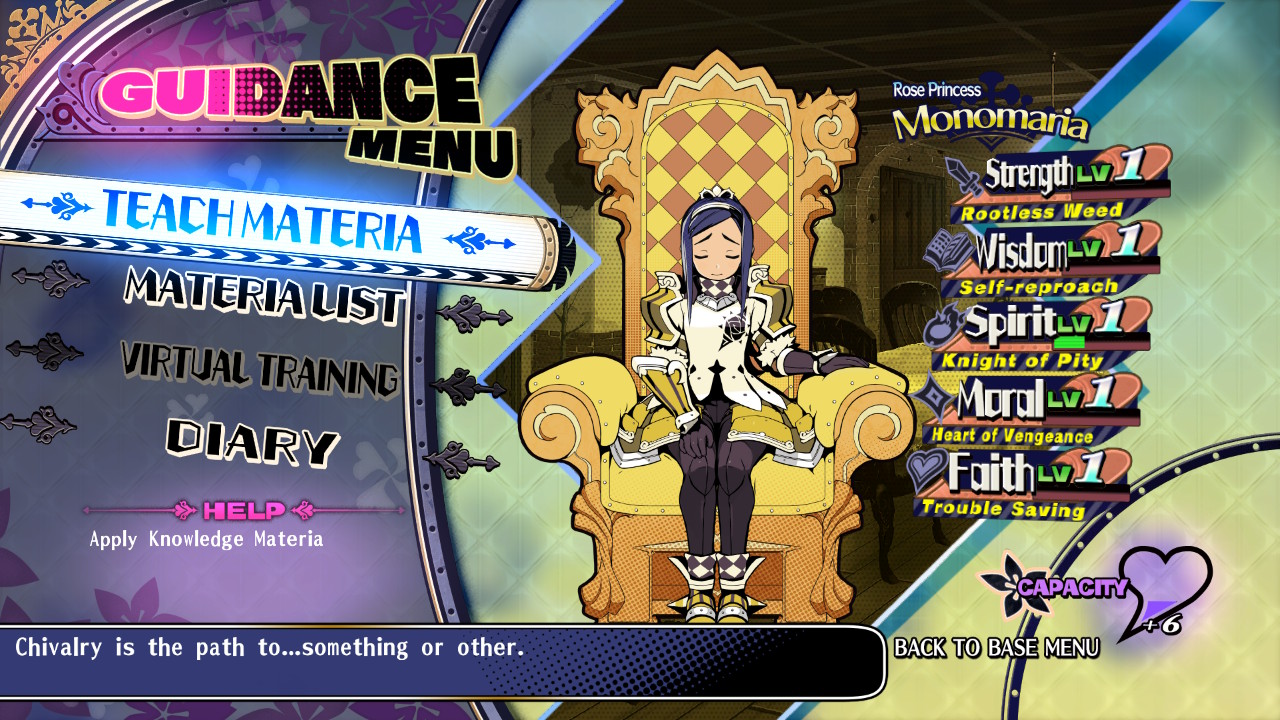 This game suffers from what I’m comfortable calling over-design and I may just make the rare diagnosis of a fatal case of it. The ultimate travesty of this game, the most egregious sin, is that it feels like it could have been so much more with just a tiny bit more effort. With the over-designed menus and UI, bland characters and story, and combat mechanics that are just one step away from being engaging, this game feels like it’s tripping over itself constantly. There were truly moments where I found myself enjoying the flow, experiencing satisfaction at completing a mission, all of which were cheapened or perhaps even completely forgotten as I was bombarded by an avalanche of frustrations and nitpicks. The Princess Guide may have been an enjoyable free-to-play mobile game but I don’t know if it deserves the title of ‘handheld game’. Not quite yet. 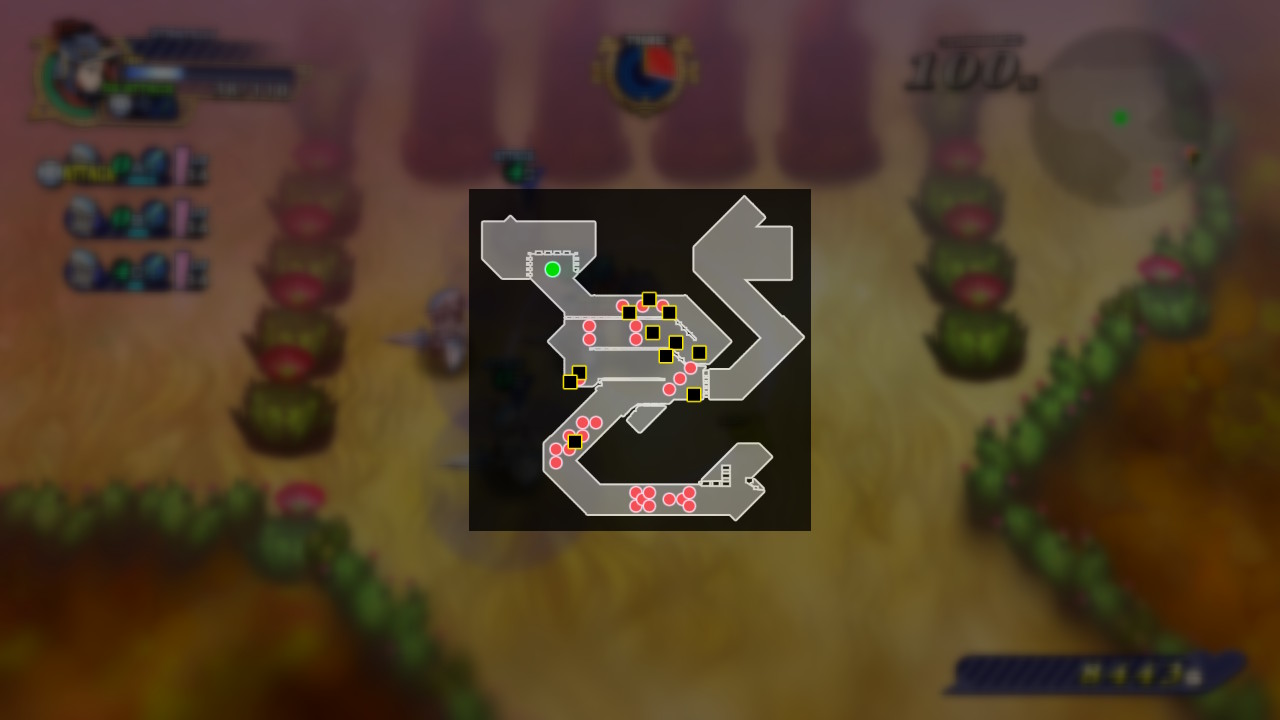 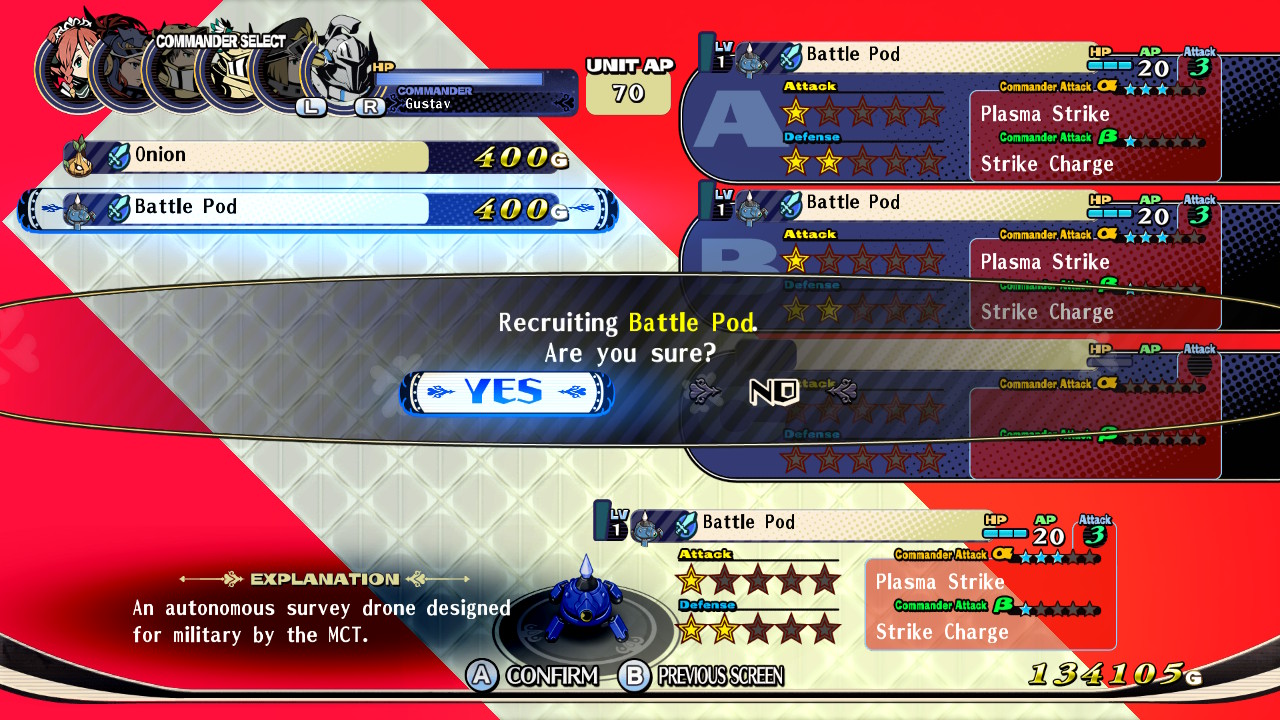 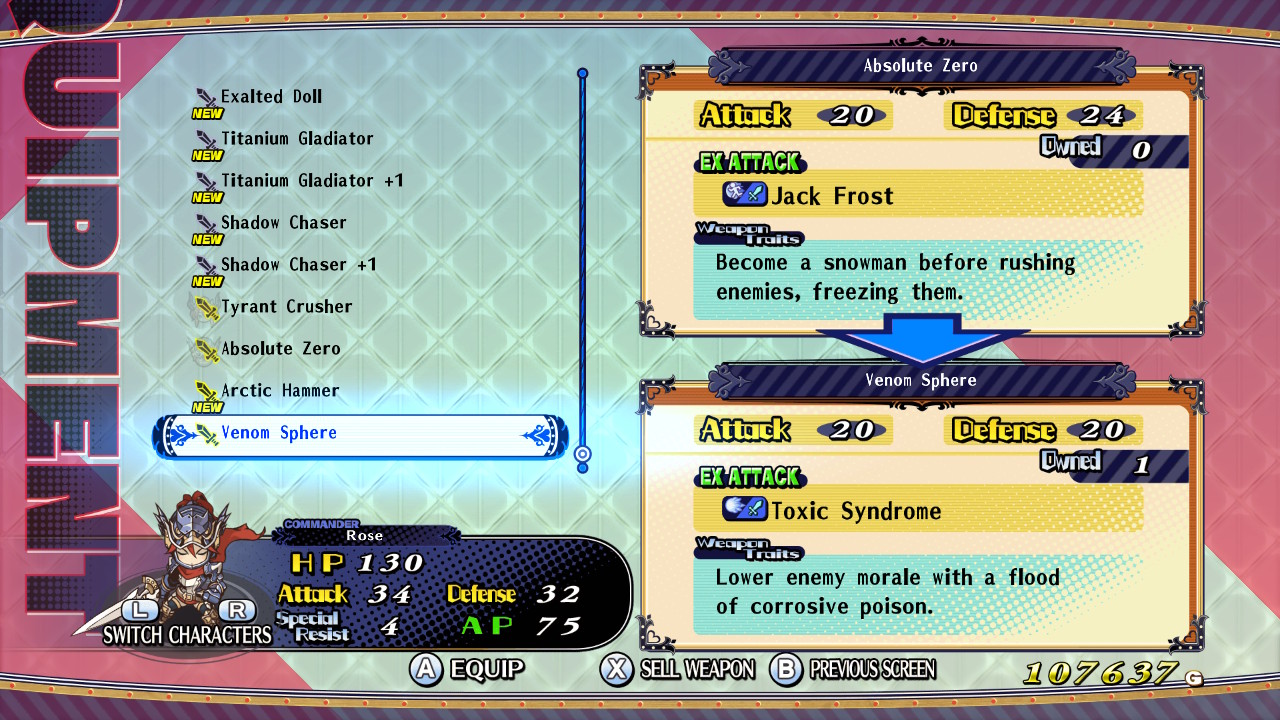 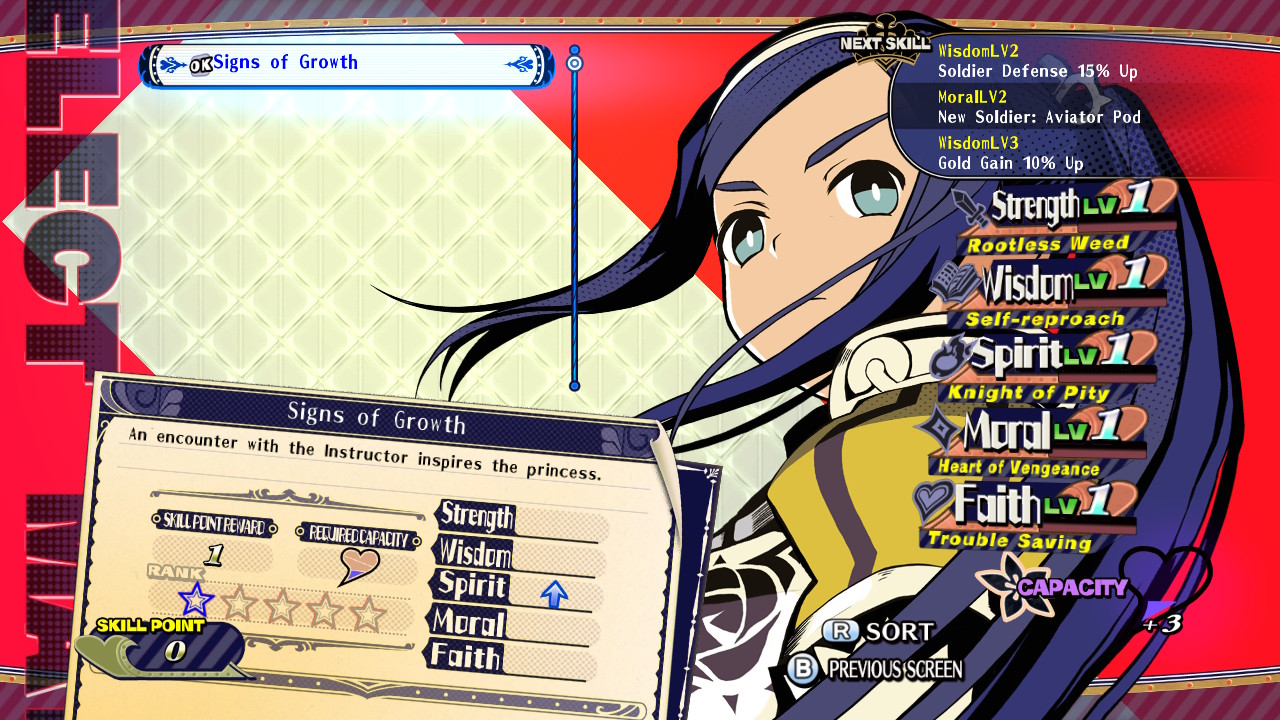 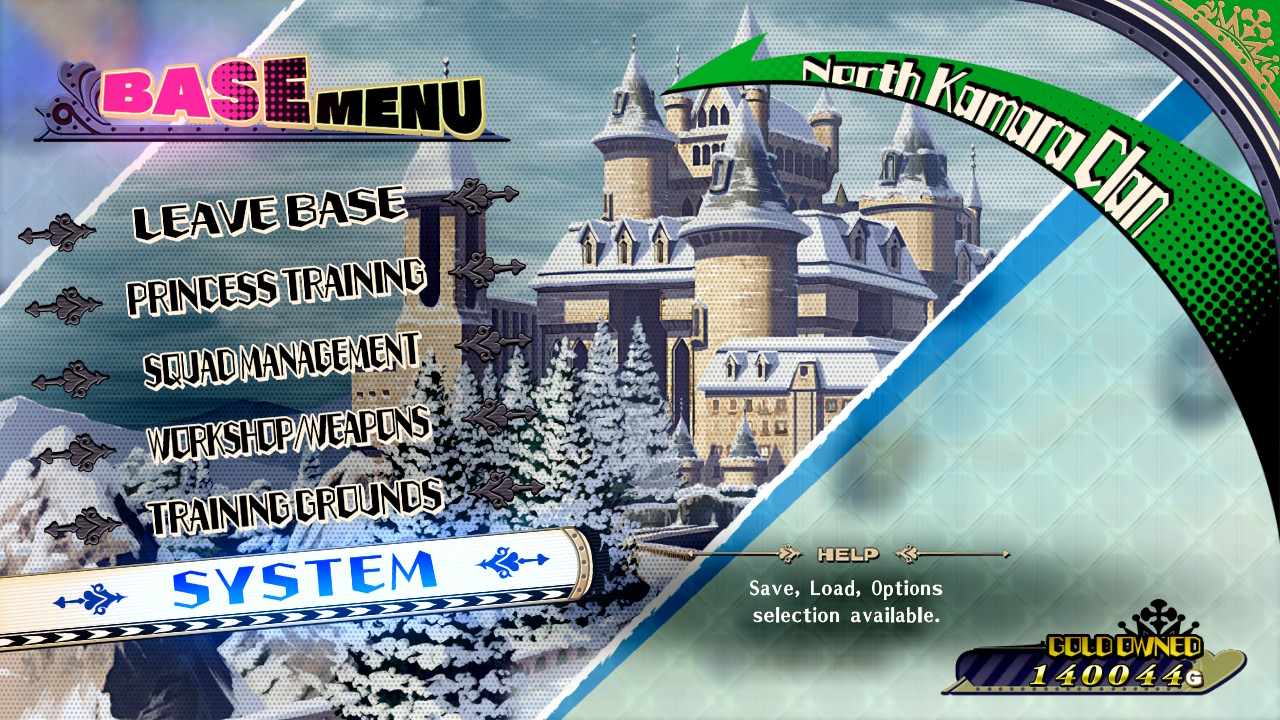 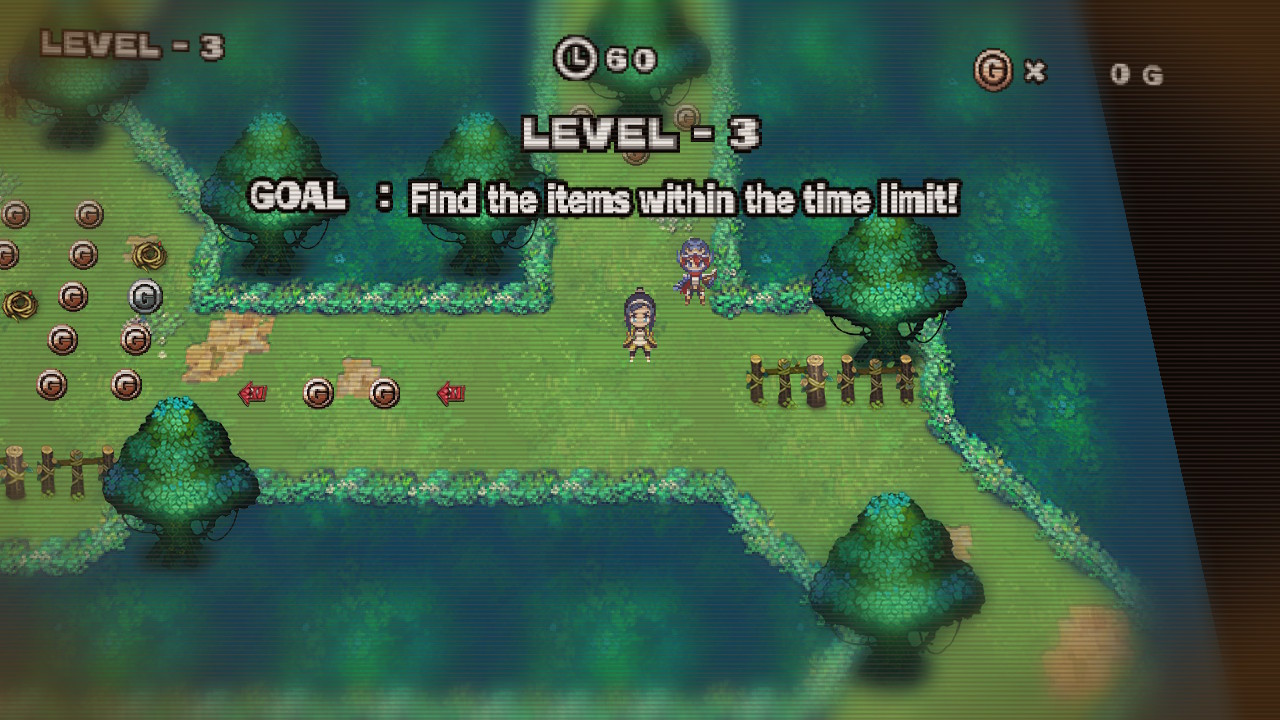 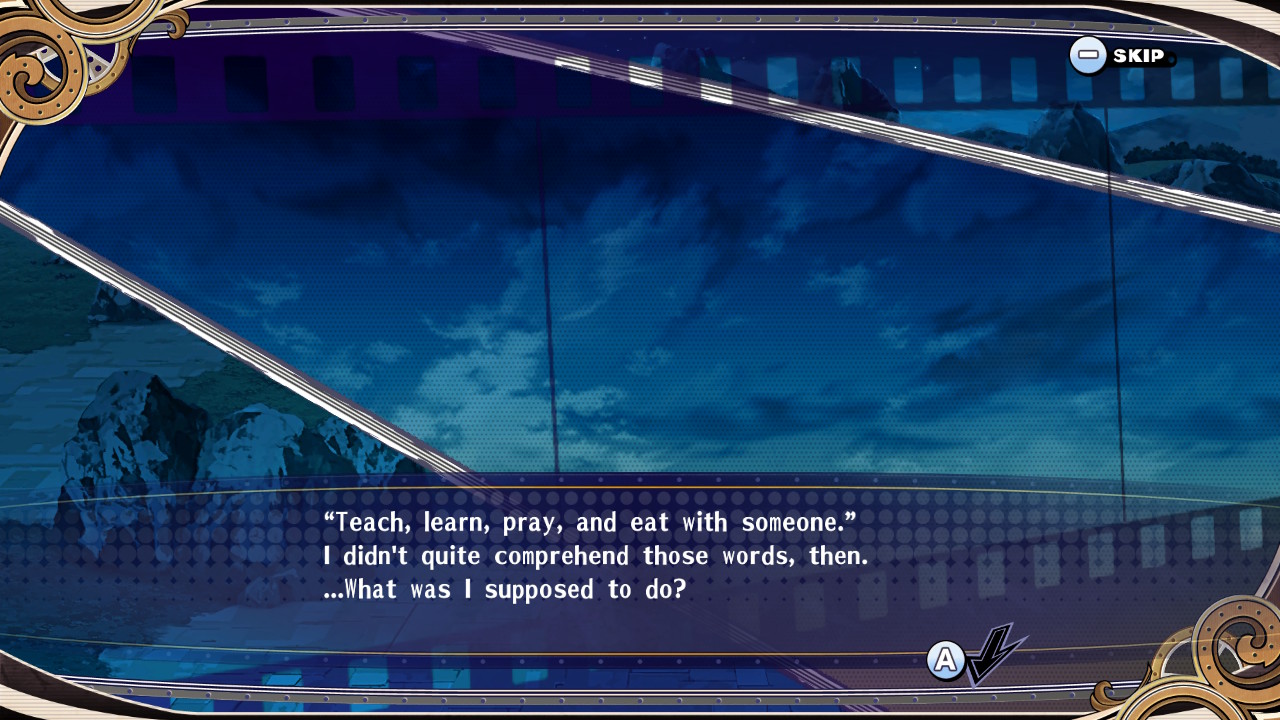 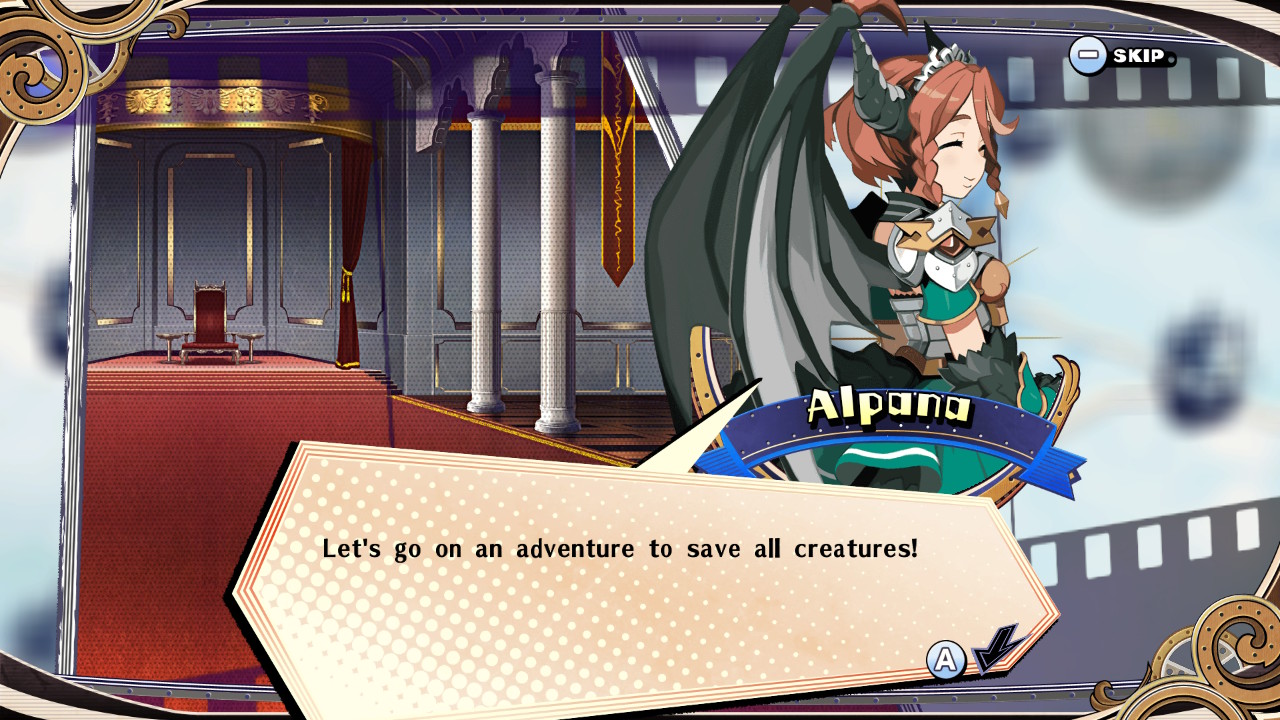